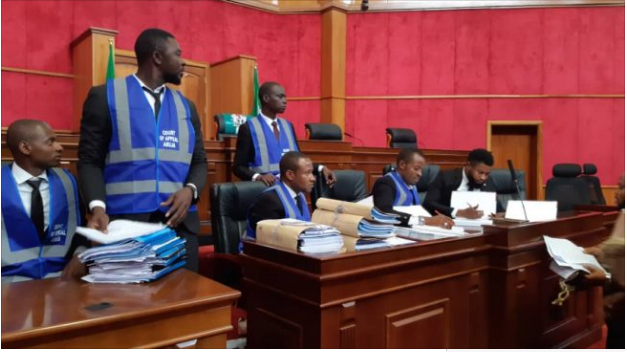 While presenting the documents, Mohammed Garba, head of the five-man panel, found that form EC8C of the local government result were two two instead of one.

Responding to the judge’s query over which of the result should be admitted, Livy Uzoukwu, counsel to the the PDP and Atiku Abubakar, the party’s presidential candidate in the 2019 election, told the tribunal that “we got the two documents from INEC. So we are tendering the two.”

The two result sheets were subsequently admitted by the tribunal as exhibits PYB 1101 and  PYB 1101A.

Abubakar, who monitored the election in Nangere, admitted this while being cross-examined by Paul Erokoro (SAN) who is counsel to Mohammed Hassan, the petitioner.

According to him, there were cancellation and alterations in some of the result sheets used for the election, and  some were torn and corrections effected.

He also admitted before the tribunal that a total of 12 alterations were made and that the changes were not countersigned.

“During our training, we were told to make amendment on issues that seem so confusing to us, I discarded some forms after receiving them,” he said.

Hassan, senatorial candidate of the PDP had dragged Ibrahim Bomoi of the All APC before the tribunal.

He had alleged in his petition that there were series of irregularities observed during the election and that on that ground Bomoi did not score the highest lawful votes cast.