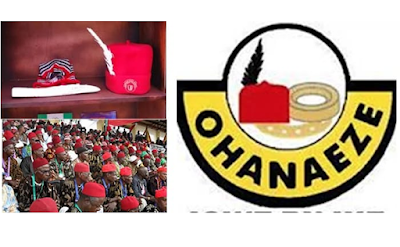 The apex Igbo socio-cultural organisation, Ohanaeze Ndigbo Worldwide, has warned ‘some misguided’ Igbo politicians to stop abusing their people because of temporary political positions they occupy.

The National Organising Secretary of the ruling All Progressives Congress, Mr Emma Bediro, had in a statement recently said that the Presidency in 2023 might elude the Igbos because they did not vote for President Muhammadu Buhari.

But Ohanaeze, in a statement by its Deputy National Publicity Secretary, Mr Chuks Ibegbu, wondered why ‘a full-blooded Igbo man’ could make such a statement.

“I don't expect an Igbos to be at the vanguard of such discouraging statements. The other time, it was Rotimi Amaechi, Orji Uzor Kalu and then even Rochas Okorocha. Some Igbo fully identified with Buhari and some others with Atiku just as some northerners, westerners and Niger Deltans did too.”


While he wondered what made Igbo position today exceptional, Ibegbu added, “when the Yoruba rejected Obasanjo, was he not made Nigeria’s President? Did the Niger Delta or the North all lick the buttocks of power holders in Nigeria before their own became Nigeria’s President?

“Why must Igbo be different and worst of all, our own people are talking like those that took tramadol. Nobody in the North or West or even Niger Delta will openly make such statements against their people even if their people are political mumu,” Ibegbu lamented.

The Ohanaeze spokesperson said, “Maybe some of them have other blood running in their veins. For me, nobody has monopoly of political wisdom, not in the North, not in the West and not anywhere. Sometimes, it’s just mere luck or political intimidation.”

He, however, advised Igbo politicians who do not know what to say or how to engage their co-competitors in other parts of the country to keep quiet rather than embarrassing their race.