Sowore, Nnamdi Kanu meet in US, discuss ‘how to fight Nigerian oppressors’ 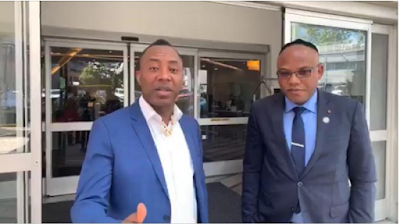 Omoyele Sowore, presidential candidate of the African Action Congress (AAC) in the 2019 elections, met with Nnamdi Kanu, leader of the Indigenous People of Biafra (IPOB), in New York on Tuesday.

In a Facebook video, Sowore said the meeting which is one of many to come would send “shock waves down the spine of the oppressors in Nigeria”.

“They know that the moment all the oppressed people get together, they are in trouble. We are calling on all our brothers and sisters, wherever you may be,” Sowore said.

“It doesn’t matter where oppression is ruining your life, what you need is freedom and what we are determined to give you is that freedom.”

He said they talked about things they have both been passionate about but on a different plane and both respect those boundaries.

“Those of you out there who think we have big differences and that we can’t talk, know that when people have revolutionary minds, these minds meet and bodies eventually meet,” he said.

On his part, Kanu described Sowore, as his friend, saying their eventual meeting was a confirmation that people can come together.

“I met with my good friend Sowore and it has yielded today a confirmation that people can come together,” he said.

“There isn’t much of a difference for what we are fighting for because we are fighting for justice. We know and hope that the people that found themselves today trapped in that contraption called Nigeria will one day be free and it takes people to do it.

“I doubt it comes from heaven and we have to do it, we have decided to do it and it must be done.”

In a telephone conversation with TheCable, Sowore said they had three separate meetings, and the first was to hear him out on the matters of concern to his constituency.

The second was to discuss a possible collaboration and synergy, and the third was how to bring more young Nigerians desirous of total change.

“This was my plan had I become president, one of my duties would have been to bring all warring factions together and rewrite the constitution that is agreeable to all,” he said.

Kanu, who is facing trial alongside other Biafran activists for alleged treason, had gone into hiding months after his bail only to reappear in Israel after one year.

In April, he had described a warrant of arrest issued against him as “merely academic.”