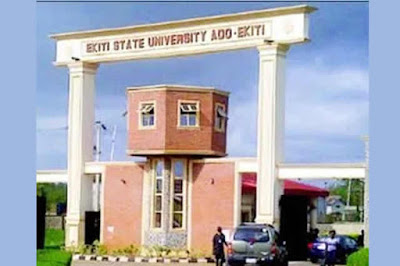 A lecturer at the Ekiti State University, Ado Ekiti, Dr Olayeye Aduwo, on Monday denied involvement in the s3x-for-marks allegations levelled against him.

The lecturer in the Department of Accounting alleged that he was framed-up by a female student, who he alleged, brought some armed men to assault him at his residence in Ado Ekiti on June 12.

The lecturer, following a video that went viral, was accused of attempting to have s3x with one of his female students in exchange for marks before he was tortured.

Aduwo, who had since the incident kept sealed lips, said on Monday that he would approach the court on conclusion of the investigations by the police and EKSU panel probing the matter, saying, “I will take option from my lawyer’s point of view. I will take legal action”.


The lecturer, who said the allegations of s3x-for-marks and being caught in the student’s hostel were mere fabrications, said he was a guardian to the student in question, who was also his daughter’s friend

He said, “I cannot really understand her motive for the act”.

Aduwo, who said the student had called him earlier in the afternoon that day to inquire about his whereabouts, said, “I was in my house that fateful day, June 12, between the hours of 9:00 p.m. and 10:00 p.m. when the girl knocked on my doors.

“I was about to have dinner with my friend, Mr Allen Akinmudiro, co-inhabitants in the same flat when she came in that she wanted to see me briefly. In fact, the three of us had dinner together.

“It was after the dinner that the lady signalled to some armed hoodlums, who invaded my house and wasted no time as they manhandled me and my friend. They stripped me naked right in my sitting room and subjected me to serious torture using electric device and they beat me with harmful objects”.

According to the lecturer, who said he had no choice than to obey the hoodlums’ instructions so as not to lose his life, all efforts by his landlord and neighbours to rescue him failed as they were threatened with arms and had to run for their lives.