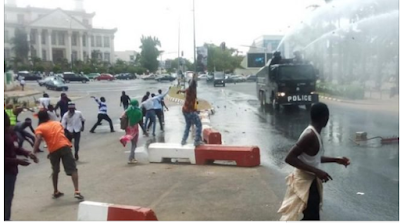 President Muhammadu Buhari is considering the proscription of the Islamic Movement in Nigeria (IMN), security and administration sources have revealed.

The proscription, which is likely to come in form of an executive order, is expected to be made public between tonight and tomorrow.

An emergency meeting of security chiefs held at the State House late Monday afternoon, and the conclusion was that the IMN will be declared an illegal organisation in Nigeria.

It is a direct response to the protests that turned violent Monday when members of Shiite IMN took over the streets of central Abuja, the Nigerian capital.


The demonstration was billed as just another instalment of relentless agitation for the release of Ibrahim El-Zakzaky, a foremost Nigerian Shiite cleric who was taken into custody four years ago.

It, however, ended with casualties, including the death of a deputy police commissioner. The IMN said 11 of its members were killed during the violence.

Presidential spokespersons, Femi Adesina and Garba Shehu, did not immediately return requests for comments about the president’s consideration of a Shiite proscription on Monday night.

Mr El-Zakzaky was arrested following an invasion of his residence in Zaria, northern Nigeria, between December 12-14, 2015.

The military said the protesters had attempted to block the Chief of Army Staff, Tukur Buratai, from the free passage on a highway that runs through the Shi’a headquarters in Zaria in the evening of December 12, 2015, and soldiers had no choice but to open fire when the Shiites became unruly.

The IMN strongly disputed the military’s account, saying its members were peaceful during the encounter.

They also questioned why the Nigerian Army deployed heavily armed soldiers, bulldozers and excavators to demolish both the headquarters and Mr El-Zakzaky’s residence in an operation that lasted two days.

A panel of enquiry constituted by the Kaduna State Government indicted Nigerian Army officers for the massacre, and also recommended the prosecution of some IMN leaders for various offences.

Governor Nasir El-Rufai accepted the conclusions of the judicial panel, but partially implemented its recommendations by proscribing the Shiite movement in Kaduna State.

No action was taken against the military officers indicted by the panel.

A separate investigation into the violence has been ongoing at the United Nations, with preliminary findings revealing that the Nigerian government has questions to answer.

Mr El-Zakzaky and his members have instituted several court cases against the government for his detention, and an order for his release had been handed down by a federal court.

However, the government has been reluctant to obey the order, citing national security and the cleric’s safety.

A few days ago on July 10, federal lawmakers also passed a resolution for the Buhari administration to honour court orders and release the cleric. They expressed fears that Nigeria’s security crisis could get even more complicated if IMN members become radicalised over the prolonged incarceration of their leader and deadly confrontations with security forces.

The cleric was taken away from the public’s view, alongside his wife, Zeenah, who was arrested with him on December 14, 2015.

He was only allowed a brief appearance before television cameras at the headquarters of the State Security Service in Abuja, where he had been detained for the most of his incarceration.

A few months ago, the cleric was transferred to Kaduna and arraigned on criminal charges. But widespread protests for his release continued almost every other day since his arrest.

The protesters have encountered deadly response from Nigerian security forces, which had led to hundreds of deaths.

In October 2018, dozens of Shiites were killed when Nigerian soldiers responded to a procession with live ammunition.

Security agencies, however, denied using disproportionate force, saying the Shiites were the aggressors and they would not be allowed to take over the Nigerian capital and unleash violence on citizens.

Groundwork laid
The Buhari administration has long categorised IMN as a violent group and encourages the use of force to suppress its agitations.

“This proscription will put an end to the madness of Shiites in Nigeria,” one of the official sources who confirmed the discussion on the executive order for proscription said on Monday night.

Another source said Mr Buhari would cite the Terrorism Prevention Act to ban the Shiite movement in Nigeria. The law was introduced under President Goodluck Jonathan to proscribe Boko Haram as a terrorist organisation and intensify the crackdown on its members.

PremimTines reports that the police have concluded that they might not be able to contain Shiite protesters in Abuja any longer. But the administration had now become reluctant to deploy soldiers to crush protests in downtown Abuja because of its negative perception.

Sources said Mr Buhari sympathised with the situation the police have found themselves on the Shiite crisis but was also concerned about what Nigerians would say should he proscribe yet another group for its antagonistic tactics.

“The judgement is called for,” a source said. “But the presidency is probably concerned that people will say: so why not Fulani Herdsmen, too?”

Our sources spoke under anonymity because they were not authorised to disclose the development before a formal announcement by the administration.

If gazetted, the IMN will be the second organisation to be proscribed by Mr Buhari, who assumed office in May 2015 and was declared the winner of a second term this March. The government had declared the separatist Indigenous Peoples of Biafra (IPOB) a violent group in 2017 and proscribed its activities across Nigeria.

It was not immediately clear how the IMN would respond to its proscription if announced.