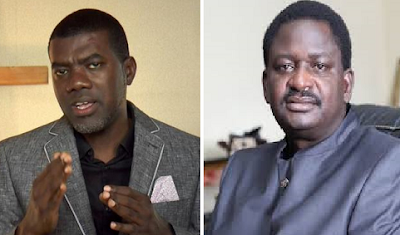 Mrs Olakunrin was killed along the  Ondo-Ore road on Friday.

He tweeted, “President Muhammadu Buhari condoles with Afenifere leader, Pa Reuben Fasoranti, whose daughter, Mrs Funke Olakunrin was killed along Ondo-Ore road by those described as armed robbers by Ondo Police Command. He prays God to give Pa Fasoranti fortitude to bear the loss.”

However, his claim was countered by Omokri, who addressed Adesina directly on Twitter.


Omokri tweeted, “Dear @FemAdesina, Those who were there said HERDSMEN killed Pa Fasoranti, the Yoruba leader’s daughter. But you, sitting in your AC office in Abuja, claim it is armed robbers, because the herdsmen are from the same tribe as your boss. Femi, fear God!”

Adesina has since revealed that President Buhari had called Fasoranti to commiserate with him over the death of his daughter.