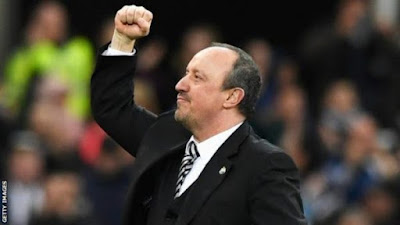 The Spaniard left the Magpies on Sunday after his contract expired, saying that the Premier League club “did not share his vision”.

He replaces Choi Kang-hee, who resigned on Monday “for personal reasons”.

“After a long path, we start a new challenge. I´m happy to begin this new project with Dalian Yifang,” said 59-year-old Benitez.


Benitez, who has also managed Liverpool, Chelsea, Valencia and Real Madrid, received a £12m offer to manage Dalian Yifang, tweeted a message welcoming himself to the club.

He led Newcastle to a 13th place finish in the Premier League last season.

“I wanted to stay, but I didn’t just want to sign an extended contract, I wanted to be part of a project,” Benitez said in a letter to fans on Monday.

“I’m very sad about that, but I do not regret for one moment my decision to come to Tyneside and I’m very proud about what we achieved together.”

The move to Dalian sees him reunited with Marek Hamsik, who played under Benitez at Napoli between 2013 and 2015.