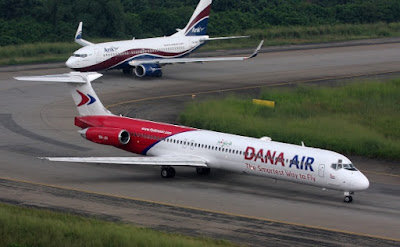 Passengers at the Nnamdi Azikiwe International Airport, Abuja, have expressed disappointment in Dana airline meant to fly them from Abuja to Port-Harcourt.

A cross section of the passengers who spoke with the News Agency of Nigeria (NAN) on Friday at the airport described their experience as unfortunate.

One of the passengers, Mr waribo Kuku, said he was supposed to board Dana flight from Abuja to Port-harcourt since Wednesday (July 10), but no flight was available.

Kuku called on the management of Dana airline to compensate him for the delay and inconvenience.


He also appealed to relevant authorities, such as the Federal Airport Authority of Nigeria (FAAN), Consumers Protection Council and SERVICOM, to address such grievances and ensure that customers were adequately compensated to serve as adeterrent.

Another passenger, Mr Jerry Wanodi, told NAN that he was booked a Dana flight from Abuja to Port-harcourt since Thursday but couldn’t board the flight due to rescheduling and cancellation of the flight .

Wanodi said that he had been at the airport since 2 p.m on July 11, up till the 6.30 p.m and there was no sign of any Dana Air flight on ground.

Another passenger of the same airline who pleaded for anonymity said he was disappointed with Dana and threatened to sue them for damages.

“I have to go back to my family, you know how women think. It’s like I have been giving excuses on why I haven’t come home yet.

“I also want them to pay compensation to me for keeping me at the airport since Thursday,” he said.

Similarly, Mr Berepelebo George told NAN that he has lost an opportunity to be gainfully employed because of the cancelled flight.

“I have an interview appointment with an organisation in Port-harcourt which I have missed due to flight cancellations.

“I want the relevant authorities to have regulations on airlines to tackle this impunity,” he urged.

Mrs Amaka Ojeka, another sad passenger, described the development as a national embarrassment.

Ojeka narrated how she flew in from Germany, noting that there was no stroller at the international wing and had to wait for 45 minites before she was able to secure one.

She also expresded regretd that she has been waiting to board Dana to Port-Harcourt but found out that there was no aircraft on ground.

“I am disappointed by what is going on at the airport because you can’t find this in a developed society.

“They are not organised and why is Dana not returning my money but they sent a message via email for me to come to the airport and there was no plane on ground.

“Government should look into the matter and take appropriate measures to address it,” she said.

The FAAN authorities and Dana Air management were yet to react to the development in spite of media inquiries.

NAN reports that the passengers waiting to board Dana Airline flight to Portharcourt and Lagos have been kept in suspence amidst mounting anxiety. (NAN)