Osinbajo to military: Be ready to lay down your lives 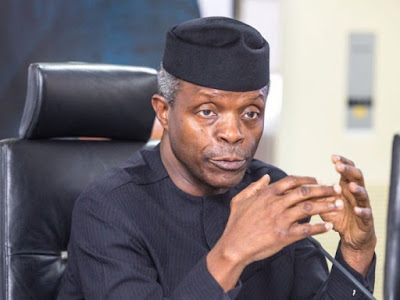 Vice President, Yemi Osinbajo has charged the military to be ready to lay down their lives in defending Nigeria.

He said men of the Nigerian Armed Forces should not pride themselves in wearing the uniform alone but be prepared to lay down their lives in defending the integrity of the country.

Osinbajo said this during the passing out parade of Direct Short Services Course 28/2019 of the Nigerian Air Force in Kaduna on Wednesday.

He said: “Given the quality of training that you have received, I am confident that you will be able to cope with the demanding tasks ahead. As you already know, this profession you have chosen requires absolute discipline, loyalty and hard work. It is much more than just securing a job, or earning a salary, and more than just getting the chance to wear a coveted uniform or wield coveted weapons.


“This is the ultimate form of civic service to defend the territorial integrity of your country and to put your life on the line, for the safety and welfare of millions of your countrymen and women. There is no nobler occupation than this one you have chosen.

“You are passing out at a time when our Nation is grappling with an insurgency in the Northeast, and the challenges of kidnapping and armed banditry in other parts of the country. You will, therefore, have to come to terms with the fact that the days, weeks and months ahead of you, will be extremely busy as you fulfill your responsibilities to the military and the Nation.

“While the Armed Forces have effectively contained the territorial ambitions of the Boko Haram terrorists, by substantially degrading their capacity to attack and wreak havoc, they remain intent on shedding blood and sowing fear.

“There is also the threat of the Islamic State of West Africa Province, ISWAP, in the Lake Chad Islands and part of Southern Borno. Also, more often these days, these insurgents are focusing on soft targets, opportunistic attacks on isolated military units, as well as, on increasingly sophisticated propaganda, aimed at making them out to be more organized and lethal than they really are.

“This ever-increasing reliance on propaganda is a reminder that this is not only a ‘battleground’ war, but it is also just as much an information-and-narrative war. Winning hearts and minds have always been important in military warfare; it is even more so in a century defined by information and communication technologies.

“As 21st century military officers, how you project your strength and confidence to your enemies and the world, especially using social and digital media tools, is as important as the sophistication of the conventional arms and ammunition that you wield. But to do so effectively also means that you must take the time and trouble to fully understand the nature of the threats that confront us, the narratives and philosophies that underline those threats.

“Distinguished guests, ladies and gentlemen, as you all know, Boko Haram is not the only threat confronting us. There are the clashes between crop farmers and pastoralists, as well as the incidences of kidnapping, armed banditry and militancy.

“In recent weeks, the President in collaboration with State governors has been reviewing the security architecture of the country. This has involved not just the Armed Forces, but in particular, the Police who have recently announced their community policing strategy. This initiative involves the recruitment and training of policemen in each local government and ensuring that such new policemen remain in their local governments, working with local and traditional authorities, to maintain peace and security.

“As the President has said, security is a twenty-four-hour occupation, involving continuous investments in strategy and innovation. We will continue to take all necessary measures to tackle all forms of criminality across the country and to safeguard lives and property of all Nigerians.

“The Nigerian Air Force will, as part of the Armed Forces, continue to be at the forefront of our national security interventions. I note in particular, the extremely successful digitally accurate bombings of terrorist hideouts in April and the destruction of Boko Haram mechanic workshop in Borno in May, the air strikes on Tumbun Hamma on the fringes of Lake Chad, inflicted heavy casualties on ISWAP forces, under Air Task Force of Operation LAFIYA DOLE. In June, there were air strikes on Sambisa Forest further eliminating insurgents

“It is particularly commendable that you are adopting measures to ensure that the resources available to you are used judiciously in a manner that delivers optimal results and maximum value for money.

“I am aware that in line of ‘doing more with less’, which is one of the guiding philosophies of the Buhari administration, several moribund assets of the Air Force, aircrafts in particular, have been reactivated in the last four years, and a lot of effort has gone into building local technical capacity to fix and maintain your operational assets.

“In addition, the increasing emphasis of the Nigerian Air Force on local innovation is noted. The recent launch of the Tsaigumi, Nigeria’s first operational, locally-developed Unmanned Aerial Vehicle, is confirmation that you are on the right path. I charge you to continue to be open to innovative ideas and collaborations with academia and the private sector.

“I would like to leave today’s graduating cadets with this important reminder: this nation is great and can only become greater. We are Africa’s largest economy by GDP, the States of Nigeria have larger economies than many African States. We have become the last frontier for major economic growth.

“We are the world’s largest growers of cassava and yams, we are top 5 in the world in sorghum, millet and we are approaching self-sufficiency in paddy rice production.

“Our potential in technology and entertainment has been attracting huge attention. First is the market, at 174 million GSM phones, we are among the top ten telephone users in the world, and we have the highest percentage of people who use the internet on their phones in the world. We are also number 2 in mobile internet banking in the world and there are 17million Nigerians on Facebook.

“Microsoft has announced that it will establish a 100million dollar African Development Centre in Nigeria. We are already building our own drones. But not only are we building drones, we are also making spare parts for our aircrafts. We are manufacturing armoured personnel carriers, and all sorts of different military platforms. All of these are things that Nigerians are doing in this country.

“Just last week, we saw at the Army Day, sophisticated minesweepers that are manufactured in this country. In a few short years, this country will be, by far, the greatest military force in Africa and certainly the most developed economy in Africa.

“All of these have been built on the sacrifices of many with blood and sweat, especially men and women of the Armed Forces. What will undermine our efforts now and in the future is disunity. We must resist all those who are preaching narratives of divisions along ethnic and religious lines. We must resist all who try to destroy our present gains and in particular, our future. The future of our country is bright, what we all need to do is to keep focus, not to allow anyone preach division amongst us. If we remain stable and united, everything that we desire for our great country will be ours.

“As I conclude this address, let me commend the Chief of Air Staff for providing inspiring leadership for our Air Force. His farsightedness and innovativeness have greatly advanced the prestige and capacity of the Air Force.

“Our gratitude also goes to everyone involved in the training that these graduating cadets have enjoyed during their time here; the Air Officer Commanding, Ground Training Command; the Commandant of the Military Training Centre, and all the hardworking men and women who are the committed tutors and trainers.

“As the gatekeepers of a major pipeline of talent for the Nigerian Armed Forces, I implore you to continually strive to devise ways of improving the quality of training that you provide. To the Governor of Kaduna State, thank you for being a welcoming and supportive host to various units and bases of our Armed Forces.

“On our part as the Federal Government, we will continue to give priority attention to the operational requirements and the welfare of the personnel of the Nigerian Armed Forces.

“Finally, let me extend, on behalf of the President, Commander-In-Chief of the Armed Forces, President Muhammadu Buhari and on behalf of the entire country, our heartfelt congratulations to the graduating cadets. This is both the end of one important journey and the start of another, longer and potentially, more fulfilling one. We rejoice with you and with your families, friends and loved ones. You have every reason to be proud of what you have achieved, and to look forward with excitement to what the future holds for you.”