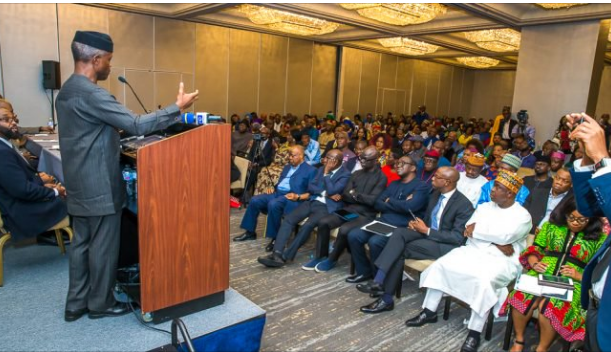 The Vice President, Prof. Yemi Osinbajo has rubbished the perception in some quarters that President Muhammadu Buhari was protecting killer herdsmen and Boko Haram members.

Osinbajo said the narrative that the “president was protecting killer herdsmen and Boko Haram members was a desperate ploy to promote ethnic and religious suspicion”.

He spoke at an event to mark the 80th birthday of former Governor of Ogun State, Chief Olusegun Osoba in Lagos, on Monday, NAN reports.

The Vice President said Boko Haram terrorists once made an attempt on the president’s life, and the incident, which occurred during one of his campaign visits, had betrayed the fact that the claims that he was protecting them were just to cause disunity.

He said the government was committed to the well-being of all Nigerians and urged citizens to unite against all evils, including religious extremism.

Osinbajo said that Boko Haram, Islamic State West Africa Province (ISWAP) and others were enemies of the nation, urging all citizens to join hands with the government to root them out.

”The likes of Boko Haram, ISIS, Islamic State West Africa Province and many Salafist-Jihadist ideologies are expansionist ideologies that feed purely on hate, hatred of any person or group that does not belong to their particular sect.

”They have no redressible grievances; so there are no terms of reference for peace. Fanatics committed to a twisted creed.

”They exploit the ignorance of the tenets of Islam, poverty and exclusion, recruit men and women and use children to perpetrate the most heinous atrocities.

“They are motivated by a satanic desire to control communities by murder and terror.

”Whether it is in Iraq, Borno or Syria their victims are men, women and children, Muslim or Christians so long as they do not share their sick ideology, they target churches, mosques, markets and motor parks where people gather, using children as human bombs to kill randomly, regardless of tribe or faith.

”The challenge for us is to recognize this extremism for what it is. To form alliances across faiths and ethnicities to destroy an evil that confronts us all,” he said.

According to him, herder and farmer conflicts, random killings, banditry and kidnapping in different parts of the country are extant challenges that the army has had to intervene in on several occasions.

”I want to reassure all Nigerians that these issues are being seriously tackled by the Federal Government, working with the States, through a multi-pronged approach. Nobody will be allowed to maim, kill or commit other crimes and escape.

”It is our duty to apprehend and punish these criminals and we are doing and will continue to do so,” Osinbajo said.