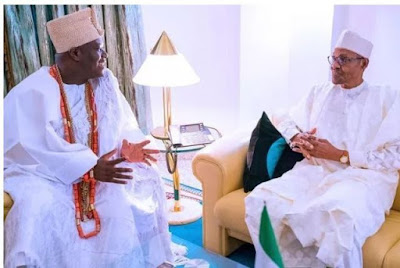 The Ooni of Ife, Oba Adeyeye Ogunwusi, on Thursday called for the tightening of security in the South-West by the Federal Government amid the increasing attacks by herdsmen on communities in the geopolitical zone lately.

He noted that while not all Fulani herdsmen were involved in the attacks, it was the wish of Yoruba monarchs and their subjects that the Federal Government in collaboration with local communities, should fish out the “bad eggs” among the herdsmen.

The Ooni stated that the escalating security challenges in the country had led to some persons and groups beating the drums of war.

However, he clarified that the South-West was not ready to go to war with any part of the country.

The paramount ruler disclosed that it was the desire of the Yoruba to see improved security over lives and property, a responsibility he said was not impossible for the Federal Government to undertake.

The Ooni, who spoke with State House Correspondents after he held a meeting with President Muhammadu Buhari at the Presidential Villa, Abuja, said he came to the State House on behalf of royal fathers in the South-West to make a case for improved security.

His visit came just a week after the late Mrs Funke Olakunri, the daughter of the Afenifere leader, Pa Reuben Fasoranti, was killed by suspected herdsmen along the Kajola-Ore Road in Ondo State.

Speaking on whether he thought the Fulani were being stigmatised , the Yoruba paramount ruler said, “Well, it is not about stigmatisation; it is about separating the wheat from the chaff.

“We want to try as much as possible to work with the government right now. They have all the security apparatus and they are meant to defend us; that is what we are looking up to now. We have to stand up and meet with Mr President and he has given us a listening ear and you (will) see a lot of result going forward.”

Responding to a question on the purpose of his visit, Ogunwusi said, “(It was on) how to improve security. I came to speak on behalf of other traditional rulers. The issue at hand in the South-West is real. The issue of insecurity; we that live in the remote and rural areas of the south-western part of the country, most of the bushes are occupied by strange people and we decided to work with the government to fish them out.

“Everybody is beating the drum of war; we don’t want war. Who can stand war? We want something better for our youths.

“We should better use them (youths) for something good other than shouting war and anarchy. We don’t want that.

“We told the President that and he is on the same page with us. Politicians should be careful not to blow things out of proportion.

“We should make sure things are right and the President has given good directives to security chiefs including the Inspector-General of Police (Mohammed Adamu), to visit all traditional institutions in the South-West.”

The monarch canvassed efficient policing and intelligence gathering that involved using the locals to help fish out strange elements in the various communities.

Opposing a resort to war at this point, he said, “We shouldn’t keep over-hyping war and we still want to keep the peace in the South-West. We don’t want anarchy.”

Ogunwusi also noted that the controversial Ruga scheme appeared to have been given different interpretations, saying that Buhari did the right thing by intervening to ease the growing tension in Nigeria over the initiative.

He added that overall, what was of utmost importance to the people of the South-West was maximum security.

“What is important is for the youth not to take the law into their own hands, killing and causing violence. The drum of war is resonating loud and we are very worried.

“We need more federal apparatus to defend ourselves. We need security reinforcement from the Federal Government. We understand more than anybody. We don’t want war and we want to work with government to bring peace.

“We are not saying all Fulani are bad; it is about the bad guys working under the name of the Fulani,” the monarch further stated.

Just as the Ooni was saying this, former President Goodluck Jonathan also called on all leaders to speak out whenever things were going wrong in the country.

Recall that Buhari had a few days ago advised leaders to watch their utterances, saying those criticising his administration handling of insecurity were not patriotic.

But Jonathan on Thursday said leaders should come together and proffer solutions to insecurity in the country.

He said insecurity appeared from time to time, but noted that leaders must come together for a conversation that would end attacks on defenceless citizens.

Jonathan said this in Abuja during the public presentation of a book, “Not By Might Nor By Power: Selected messages to the world,” an autobiography written by the Primate of the Church of Nigeria (Anglican Communion), Most Rev. Nicholas Okoh, who would retire next year.

“We must get the country out of insecurity,” he said at the event which brought together eminent Nigerians including a former Head of State, Gen. Yakubu Gowon (retd.).

But in an interview with journalists on the sidelines of the event, Jonathan said every generation had challenges, adding that leaders must come together to address the menace.

He said, “If things are wrong, leaders, including me, should be talking. And there are a lot of conversations going on to solve this problem (of insecurity); every generation has its problems. In fact, my generation is almost gone. It’s for your generation and we must all come together to solve the problem.

“The security challenges have been with us for long, but we know that whatever the challenges are, we must come together and address them. The political leaders in the country and traditional leaders are talking. And we must get the country out of insecurity.”

Okoh cautioned ethnic groups forming their own militias to retrace their steps and stop the killings in the country.

He said, “I have no solution because I am an individual. But we should try to ask the appropriate authorities to do what they should do, and that is the government.

“But the government which has the constitutional responsibility to maintain security should do so and quickly too before it gets out of hand. That is my appeal.”

Also, the Primate advised young pastors not to be in a hurry, adding that what he observed was that many of them were in a hurry to be noticed.

“If you are with God, hear from God before you speak. Don’t resort to your imagination and say, ‘God has said’; make sure you receive a message from God and you are in tune with Him (God).”

According to him, the Nicholas Okoh Foundation will help him in ministry even after leaving as Primate in 2020.

“I want to continue with my work as a man of God. The book is about yearly situations and the solutions I provided. At this point, I decided that the two volumes should be published. There are other books unpublished. There is a gap between what we think and what we do. We want our children and those following us to know that we have not arrived. We must back it up with moral integrity,” Okoh added