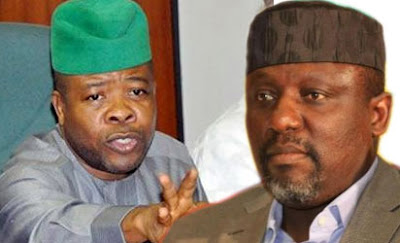 Rochas Okorocha, Imo West Senator, has reacted to the sealing of some properties belonging to him and his family by the Economic and Financial Crimes Commission, EFCC.

EFCC had yesterday sealed properties owned by the former governor of the state and his family over their failure to appear for questioning.

Reacting to the development, Okorocha said most of the sealed properties preceded his emergence as governor of Imo State.

In a statement by his Media Aide, Sam Onwuemeodo, the lawmaker also denied claims of EFCC’s invitation to Managements of the Colleges and other establishments sealed.

According to the statement: “On Tuesday, July 23, 2019, as at about 6am, Agents of the Economic & Financial Crime Commission, EFCC, from its Office in Enugu with Hilux buses loaded with armed military and mobile Policemen stormed the Rochas Foundation College Owerri, with more than three thousand students, and most of them, orphans, and sealed the College.

“The Commission also sealed the East High College and Academy, Owerri with Uloma Rochas Nwosu as the proprietor, among other investments belonging to the former governor and family which the Commission Sealed.

“The action of EFCC with the presence of heavily Armed Military and Police Mobile Personnel frightened the students and most of them began to cry. It was a sympathetic scenario.”

He accused the current state governor, Emeka Ihedioha of launching a war against him.

The statement added: “What is obvious is that the PDP government in the State with Chief Emeka Ihedioha as governor and all the PDP Chieftains who felt politically displaced from 2011 to 2019 by Rochas Okorocha had come together to launch war against Rochas and his family. And APC members. And that was why they needed INEC to declare their Candidate winner even when he didn’t meet the requirement. Unfortunately, they have instigated certain agencies like EFCC into taking some hasty actions following flood of petitions by them.

“Our concern about the action of the EFCC is the approach. There was no prior invitation to the Managements or Proprietors of the Colleges and other establishments sealed by the Commission as expected before such action. To the best of our knowledge too, these Colleges have not been under the investigation of the Commission. We have had the feeling that the Sealing of the Colleges or any other structure as the case maybe, would have been based on the outcome of their investigation in which the managements or the proprietors would have also been interrogated.

“Sealing the colleges and other properties because they belong to Rochas Okorocha’s family before investigation is what is difficult for us to comprehend especially when most of these establishments had preceded the governorship of Rochas Okorocha.

“The Rochas Foundation Colleges have existed in Imo and in several states of the Federation including Plateau, Kano, Sokoto, Kaduna, Oyo, Bauchi and so on, years before Okorocha’s governorship. And the EFCC may also go to those states outside Imo to seal the rest of the Colleges.

“What is happening in Imo at the moment is not governance. It is a total war against Rochas and his family, APC members, members of other parties and Opponents. They said they want to make the State uncomfortable for Opponents and they are doing it with recklessness.

“Senator Rochas Okorocha and family believe strongly in the State and have relocated most of their businesses to Owerri unlike these PDP bigwigs who do not love the State, with all of them having nothing to show that they have a stake in the State.

“We want to appeal to the EFCC to unseal the Colleges and other ventures they had sealed pending the outcome of the investigation they said they have begun. And also considering the stand of the Court of Competent Jurisdiction on the issue.

“The students of the Colleges, most of them without parents, cannot be allowed to suffer because of the action of a wicked government in the State. It is not all about Rochas Okorocha and the family, but about humanity and posterity.”