9:33 AM CuteNaija 1 Latest News in Nigeria 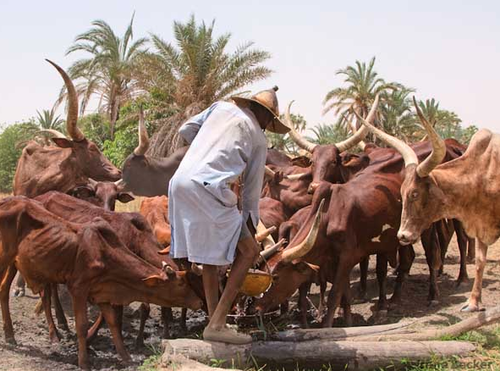 They said the herdsmen should return to the North where their (herdsmen) safety and that of their property could be guaranteed.

The northern elders and the youths said they were worried that some southern leaders had allegedly openly threatened war against the Fulani herdsmen.

They claimed that for this reason, all the herdsmen from the North living in the South should return home.


Recall that the controversial Ruga policy suspended by the Federal Government generated various reactions with southern leaders rejecting it.

The southern leaders had argued that it was wrong for the Federal Government to take people’s land by force and give it to herdsmen who were operating personal businesses.

The rejection was further fuelled by kidnappings and killings of innocent men and women by the suspected herdsmen.

Also, the Coalition of the Northern Groups had given the Federal Government a 30-day ultimatum to resolve the objection raised by the southern leaders.

However, at a press conference after a meeting of the NEF with the CNGs on Tuesday in Abuja, where the youths demanded the return of all the Fulani herders to the North, the NEF’s chairman, Prof. Ango Abdullahi, also backed the youth’s position.

However, Abdullahi said the call on the herders to retrun to the North was borne out of the alleged realisation that their lives had allegedly been put at risk due to the recent actions and utterances of the southern governors.

Abdullahi said, “We are worried about their well-being. If it is true that their safety can no longer be guaranteed, we rather have them back in areas where their safety is guaranteed.

“The bottom line is that their safety is far more important than their stay there. This is a country we all wish to keep together but not at the expense of other sections.”

Abdullahi, who is a former vice-chancellor of the Ahmadu Bello University, Zaria, Kaduna State, also called for the establishment of a judicial enquiry that would be saddled with the responsibility of determining the quantum of loss of properties by herdsmen and farmers.

This, he said, should be done with a view to paying compensation due to each of the warring parties.

Also speaking at the event, the CNG’s spokesperson, Abdul-Aziz Sulaiman, who presented the position of the northern youths to the elders, alleged that the southern governors had on July 9, 2019, jointly agreed to stop the movement of herders and cattle in the South.

He also said the governors even arrogated to themselves powers to decide which category of herdsmen could be allowed to live in the South and others whom he said they allegedly tagged as criminals.

Sulaiman also regretted that herdsmen were being blamed for the killing of Mrs Funke Olakunri, daughter of the Afenifere leader, Chief Reuben Fasoranti.

He said this was wrong as the culprits had yet to be identified.

He noted, “Throwing caution to the winds, Gani Adams, Fani-Kayode, Yinka Odumakin and a host of other southern regionalists shamelessly insisted on changing the narratives around the killing of the Fasoranti lady.

“In the process, they threatened all forms of violations and breaches against northerners including the threat of an all-out war.

“With all these statements and steps taken by the southern governors and opinion leaders, we are worried that none of the northern governors or federal official has deemed it apt to caution them.

“The failure or neglect of the police to trace a connection between the Fasoranti daughter’s murder and the seeming prearranged conduct of Fani-Kayode, Odumakin and Adams by their haste to shift the blame in order to render the Fulani object of attack is certainly suspicious.

“We are concerned about the sincerity of the Federal Government in implementing the NLTP going by the manner previous efforts at executing developmental projects like the Mambila hydro-electric power project and several initiatives on the herdsmen dilemma were invariably stalled.

“We are equally worried that the NLTP is vested in the office of the vice-president that is believed to have frustrated previous projects meant for the North.

“We find it difficult to trust the commitments of this government ,which has for the past four years, failed to execute any positive initiative towards resolving the herders’ problems nor shown any encouraging concern for the dilemma of the Fulani who have been attacked in various states.

“Based on the above observations sir, and the fact that the instigation of hatred against the Fulani persists, we feel obliged to advise the leadership of the Northern Elders Forum to consider calling on the Fulani to forgo their right to live and flourish anywhere in the South and relocate to their various states in the North to ensure their safety.”

We’re not aware of return to North order – MACBAN

But when contacted to know whether the herders would heed the advice, the Miyetti Allah Cattle Breeders Association of Nigeria told one newsmen that it was unaware of the recall of herdsmen to the North and refused to speak further on it.