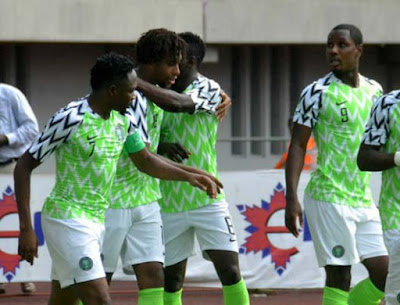 Head coach of the Super Eagles, Gernot Rohr, has made several changes to his starting line-up, for the Africa Cup of Nations round of 16 clash against Cameroon at the Alexandria Stadium, allnigeriasoccer.com reports.

Daniel Akpeyi returns in goal, while Ikechukwu Ezenwa is benched.

The back four is made up of Ola Aina, Chidozie Awaziem, Kenneth Omeruo and William Troost-Ekong.


Leon Balogun, who was at fault for Madagascar’s opening goal in the last game, has been dropped.

Wilfred Ndidi and Oghenekaro Etebo will sit in front of defence, with Arsenal star Alex Iwobi playing as an attacking midfielder.

As expected, Odion Ighalo has gotten the nod to lead the attack and the former Watford man is flanked by Ahmed Musa and Moses Simon.