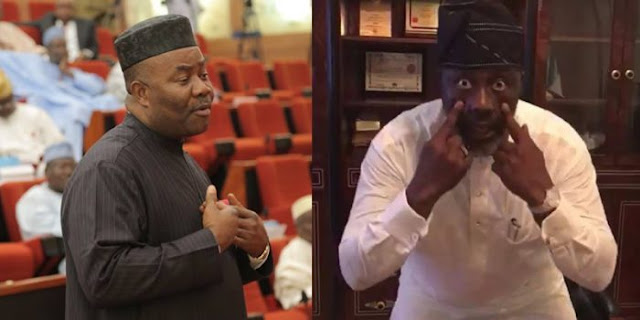 Former lawmaker representing Akwa Ibom North at the red chamber of the National Assembly, Senator Godswill Akpabio, has responded to the jibe thrown at him by Senator Dino Melaye, when he (Akpabio) lost his election to return to the Senate.

The lawmaker, representing Kogi West senatorial district had mocked Akpabio, saying that they will now be meeting on the streets of Abuja after the Ikot Ekpene-born politician lost his senate seat to Senator Christopher Stephen Ekpenyong.

Melaye, had, while hailing Governor Udom Emmanuel of the Akwa Ibom State, mocked Akpabio for failing to keep his senatorial seat.

But Akpabio was in the list of 43 Ministerial nominees submitted to the Senate by President Muhammadu Buhari on Tuesday.

Akpabio, was one of the prospective Ministers who appeared before the Senate on Wednesday for screening and standing before his former colleagues, the former lawmaker reminded the Senators, how someone in their midst, whom he described as “one of my younger brothers’ told him that they will now be meeting on the streets of Abuja and no more at the Senate chambers.

He said, “It’s a rare privilege to stand here before you my colleagues. I remember when one of my younger brothers here told me that we’ll now be meeting on the streets Abuja. But His Excellency, President Muhammadu Buhari has made it possible for me to come here and stand before you.”