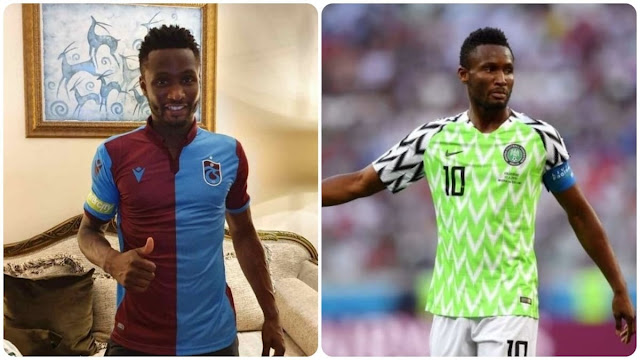 Super Eagles captain Mikel Obi has joined Turkish club Trabzonspor on a two-year deal with an option of another year, the club have announced.

The Nigeria captain, who ended his short-term deal with Championship club, Middlesbrough, last season will link up with Eagles teammates Ogenyi Onazi and Anthony Nwakaeme at the club.

“A two-year and an additional year agreement was signed with the free captain of the Nigerian national team, John Obi Mikel, to transfer to our club,” Trabzonspor announced via their official website.

“Thank you for such a warm welcome, from all the Trabzon fans. I can’t wait to arrive to Trabzon and have debut game. My family and I are very excited for our next chapter in Turkey,” Mikel stated on Instagram with a picture of him wearing Trabzonspor’s jersey.


Mikel, who is currently with the Eagles for the 2019 Africa Cup of Nations in Egypt could miss the side’s Round of 16 game due to a knee injury.

According to reports, the former Chelsea midfielder copped the injury in Sunday’s 2-0 loss to the Barea of Madagascar.

The 32-year-old midfielder missed the team’s recovery training on Monday morning with a swelling in his knee and could be out for a week.

Mikel, who has made two appearances at the tournament, stated that the Eagles risk being dumped out of the AFCON if they don’t find a good way to play well.

The Eagles have struggled to impress so far at the tournament despite reaching the Round of 16 as runners-up and they were second-best for much of the their final Group B game against Madagascar, which they lost 2-0.

“We didn’t play well against Madagascar. I think at the tournament we haven’t found a good way to play but we’ve won two games and lost one now,” he told reporters after the game.

“I think it is better that it happened in the group stages than in the knockout phase.”

“To be better as a team, we have to do more we have to find a way to win games. It’s going to be tough for us but we have to pick ourselves and show our class.

On the criticisms which the Eagles have suffered, he said,”Obviously, the criticisms will come from our people and those we love but this is football. You get criticised because you are in the game. We have to take the criticisms and improve.”