Messi’s Argentina out as Brazil qualify into Copa America Final 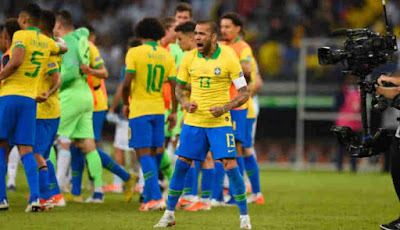 Brazil early Wednesday ensured that Lionel Messi and Argentina’s trophy drought lingers, beating them 2-0 to qualify for the final of Copa America on home soil.

Gabriel Jesus and Roberto Firmino assisted each other in each half of the fierce encounter played at Estadio Mineirão in Belo Horizonte.

Brazil controlled possession in the opening 10 minutes, not letting Argentina create anything going forward, but La Albiceleste nearly opened the scoring in sensational fashion on their first opportunity. Leandro Paredes saw space from some 40 yards out and fired away with a curling blast, one that didn’t miss Alisson’s goal by much but whizzed over the bar 12 minutes in.

Brazil got back on the front foot after that, and following a spurned chance, Gabriel Jesus made sure to put the hosts ahead.


It started with Dani Alves magic surging through the midfield, with the veteran fullback juking a defender before playing it wide right to Firmino. The Liverpool star crossed to his Man City countryman, who finished with a first-time touch from close range in the 19th minute.

Argentina threatened to equalize in the early stages of the second half with Lionel Messi rattling the post in one occasion.

Brazil punished Argentina for its inability to pull even by doubling its lead in the 71st minute.

Gabriel Jesus embarked on a run from the midfield line, shrugging off the challenges of multiple Argentina defenders, drawing Armani off his line and feeding Firmino for the simplest of finishes, and the Liverpool star tapped into the top corner to make it 2-0 and finish off Messi and company.

Brazil will either face Peru in Sunday’s final or two-time reigning champion Chile at the famed Maracanã. Chile has beaten Argentina in the last two finals, winning in penalty kicks both times.