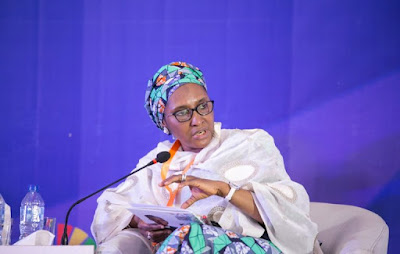 At last, President Muhammadu Buhari has sent the list of his cabinet members to the senate for confirmation. The list, which comes two months into his second term, has 43 names, including members of his former cabinet. Below are key highlights from the list.

WHO BECOMES MINISTER OF FINANCE?
Although Zainab Ahmed, the former minister of finance, was re-nominated by the president, there is no certainty that she will retain the portfolio. She was initially minister of state for budget and planning before the sudden departure of Kemi Adeosun from the cabinet. Ahmed recently indicated interest in being returned and even made a policy pronouncement on fuel subsidy, a comment that would naturally be made by the minister of finance or petroleum resources. Was she leaking a secret on her likely portfolio in the second cabinet?

She has a rival though. A look at the list shows that Sabo Mohammed Nanono boasts of more economic and financial experience than Ahmed. Nanono, 73, was the managing director of African International Bank (AIB). He studied at Ahmadu Bello University, Zaria, Kaduna State (1969-72); University of Wisconsin, Madison, USA, (1976-77); Harvard Business School, Harvard University, Massachusetts, USA, (1994, at the age of 48). He is about the only known economist on ministerial list.

YOUNGEST IS 44
This might cause some discomfort but that’s the reality: the youngest person in the president’s new cabinet is aged 44. Sadiya Umar Farouq, who is currently the federal commissioner at the National Commission for Refugees, Migrants and Internally Displaced Persons, was born on November 5, 1974 and turns out to be the youngest of the 43 persons on the ministerial list.

Although youth inclusion in democratic processes has been in the limelight in the country, the executive has been out of the picture while the legislature has recorded little progress. Interestingly, while signing the “Not Too Young To Run” law which reduced the age qualifications for elective positions, the president had told the youth: “You are undoubtedly Nigeria’s most important resource – not oil, not agriculture, not solid minerals – but you and all of us. Your energy, intelligence and talent are what will drive and develop Nigeria, long after we are all gone.”

TINUBU’S IMPRINT?
Some of those on the ministerial list have one thing in common: close ties to Bola Tinubu, a national leader of the All Progressives Congress (APC). The ministerial list has shown that Tinubu is indeed a stakeholder in this administration, unlike in the last cabinet when his men were frozen out.

Among the allies of Tinubu on the list is Rauf Aregbesola, immediate past governor of Osun state, who served as commissioner throughout the eight years the APC leader was governor of Lagos. While campaigning for a second term in 2014, Aregbesola had told reporters: “I served under one of the best public finance experts in the person of the former governor of Lagos state, Asiwaju Bola Ahmed Tinubu. The tutelage paid off so handsomely and the result is what you are witnessing in Osun.”

Another of such names is Sunday Dare who is currently an executive commissioner at the Nigerian Communications Commission (NCC). Dare had served as Tinubu’s chief of staff and special adviser (media) when the top politician was governor of Lagos state.

Also included is Olorunnimbe Mamora, speaker of the Lagos state house of assembly when Tinubu was governor and a two-term senator. Lai Mohammed, the nominee from Kwara, is also an associate of Tinubu. Not much is known about how much input Tinubu made into the nominations of Mamora and Mohammed.

Some states have more than one appointee on the list. Although the number of nominees may not be the only determinant of whether a state is favoured or not, it is no doubt a point to note.

These states are Anambra which has Chris Ngige and Sharon Ikeazor; Bauchi with Adamu Adamu and Mariam Katagum; Edo, Osagie Ehanire and Clement Agba; Kaduna with Zainab Ahmed and Mohammed Mahmoud; Kano where Sabo Nanono and Bashir Magashi come from; Kwara which has Lai Mohammed and Gbemisola Saraki; and Lagos which has Babatunde Fashola and Mamora.

A closer look shows that the extra nominees come from each of the six geopolitical zones with the north-west having two: Kano and Kaduna.

NEWCOMERS ON THE SCENE

The list features some not-so-popular names on the political scene. Among this category is Mariam Katagum from Bauchi, who served as Nigeria’s permanent delegate to the United Nations Educational, Scientific and Cultural Organization (UNESCO).

Although Clement Agba served under Adams Oshiomhole, former governor of Edo state and current national chairman of the APC, as commissioner for environment and public utility, he is not well known in the national political arena. He worked with Chevron in various capacities, including as manager, community procurement operations, as well as senior contracts adviser.


There is also Isa Ali Pantami who is the incumbent director-general and chief executive officer of the National Information Technology Development Agency (NITDA), a position he has held since 2016. He has been in the information and communication technology (ICT) for many years and is fellow of the British Computer Society (FBCS) and Nigeria Computer Society (FNCS).

There has been no indication that the president will relinquish his position as minister of petroleum resources. Although Omotayo Alasoadura, a former chairman of the senate committee on petroleum resources (upstream), appears like a candidate for the minister of state for petroleum resources position, there is one more person to consider. Clement Agba, who is a technocrat in the oil and gas field. As stated earlier, Agba worked in different capacities at Chevron. Also, Goddy Jeddy Agba, from Cross River, was a GGM at NNPC and is also in reckoning for the position.


With the row generated by Nasir el-Rufai’s Muslim-Muslim ticket in the build-up to the 2019 elections, many would have expected Buhari to make certain “balancing” considerations in the state in the ministerial appointments. In November, el-Rufai caused a stir in Kaduna when he announced that his running mate is a Muslim. The Pentecostal Fellowship of Nigeria (PFN) had accused the governor of “fanning the embers of religious disunity” in the state by his choice. In response, el-Rufai said he consulted the president before settling for his running mate. TheCable understands that el-Rufai’s former deputy, Barnabas Bantex, was in contention but he was dropped from the final list. Bantex is a Christian. Zainab Ahmed and Mohammed Mahmoud were nominated from the state.

Critics argue that for a government that sees the fight against corruption as a priority, Lai Mohammed would have at least been cleared of the allegations levelled against him before his renomination. Mohammed, who is among the 13 ministers reappointed by the president, has been asked by the Independent Corrupt Practices and Other Related Offences Commission (ICPC) to  explain his role in the alleged misapplication of N2.5 billion federal government’s digital switch-over (DSO) programme.

ICPC had filed a 12-count charge against Ishiaq Kawu, director-general of the National Broadcasting Commission (NBC), over an alleged abuse of office and money laundering. The former minister was questioned after the ICPC said its investigators discovered that a government white paper that governs the execution of the DSO programme was flouted by the head of NBC. Mohammed was said to have admitted that he was misled by Kawu, as stated in court by Osanato Olugbemi, an ICPC witness. Given that the alleged infractions were committed during Mohammed’s first term as minister, his reappointment has set tongues wagging.