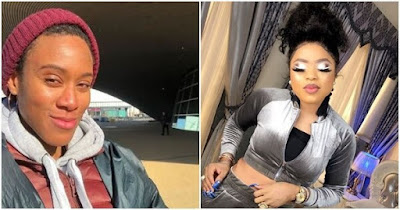 Popular Nigerian cross-dresser, Idris ‘Bobrisky’ Okuneye, is no stranger to controversy as he seems to always maintain his spotlight for negative reasons.

Just recently a dental surgeon identified as Ify Okoye on Instagram called out Bobrisky as she accused him of not returning the N8 million he had borrowed for a gender change surgery.

In a lengthy post on social media, Ify explained that Bobrisky had confided in her about how he had been ridiculed in the Nigerian community by people who call him an ‘ugly gay’.

The doctor added that she felt sorry for Bobrisky and decided to borrow him money for surgery which he would have to pay back by December 2018.

However things turned sour when Bobrisky allegedly refused to pay back the money and even proceeded to blocking Ify after she threatened to report the case to bloggers.

Her caption reads: “I struggled not to do this but I couldn’t stand people that conned me, dancing right in front of my face just to humiliate me more. Couple of months ago bobrisky blocked me after threatening him that I would call on Nigerian bloggers to help me get my monies back from him/her. Bob and I got talking and he told me that he wouldn’t mind getting surgery done to improve his/her femininity to stop being ridiculed in Nigerian community as “ugly gay”.
I felt sorry for him and told him that I can only loan him some money and that he must repay me before December 2018, he agreed and was over the moon. I got two transfers done for him, N2.5m and N5.5m. August 2018 he stopped calling me as usual and started replying my messages with “hmmmmm and Ok”. October 2018 I reminded him that I would need the money for some charity work and he stopped speaking to me totally up till date. You wonder why people are so mean financially to others these days. It breaks my heart as Nigerian justice system is zero and by the looks of things I would never have my money back.” 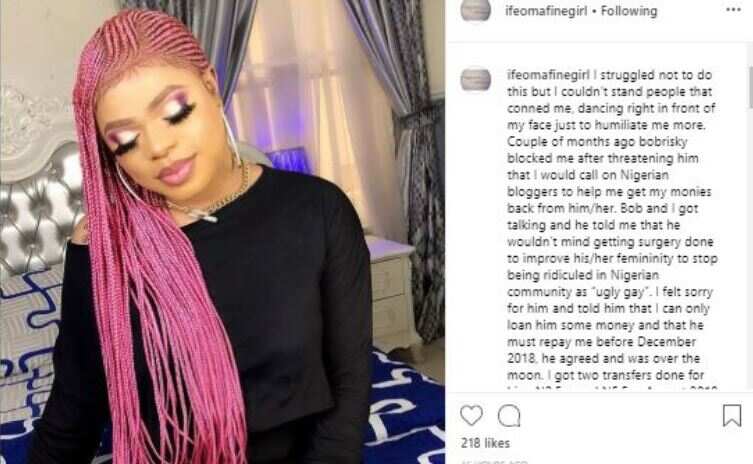 In a subsequent post, Ifeoma replied some of her followers who discredited her story because N8 million is a lot of money to give out.

Responding to them, she wrote: "And for all of you going “is a lot of money to give out, I don’t believe you”. When you are a personal trainer for Nike as a part time job and earn over £500k from that side hustle plus I work for my mother in her dental surgery as well then N8m becomes nothing to you. It’s Naira we are talking about not POUNDS + He got my sympathy because myself and my partner are bis*exual and we do support vulnerable members of gay community especially in third world countries. I have learnt my lessons. Never again

Earlier this week, Bobrisky was in the news for a similar reason. He was recently arrested for owing a boutique N665k.

Bobrisky was earlier arrested and taken to police custody on Monday, July 22. The cross-dresser was later released after fulfilling all requests made by the police.

It was gathered that a business owner in Lagos got Bobrisky arrested over breach of contract resulting in N665k debt owed by the socialite. He was paid for an endorsement deal with a boutique, had breached the contract and was asked to pay back the money he owes.

The cross-dresser was released after he agreed to pay the sum of N300k this Wednesday, July 24, and pay up the balance later. He was granted bail.

On his Instagram page, Bobrisky shared a post, bragging about his release. He claimed that the business owner was not patient enough.

According to him, he would keep his agreement to a contract whenever he wants to. He berated the business owner, saying that she arrested him after paying little money