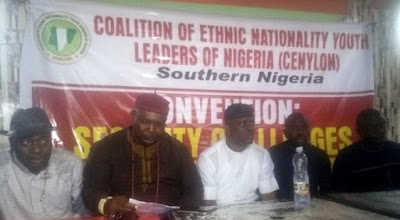 Reading a communique after an emergency meeting in Awka, Arthur Obiora, President, Ohanaeze Ndigbo Youths, said that the killing was a worrisome development in the country.

The News Agency of Nigeria reports that Olakunri was shot dead on July 12 by gunmen at Ore Junction in Ondo State.

Obiora also urged the government to urgently summon a National  Security Summit to address the problem of insecurity in the country, saying the summit should be prioritised as a matter of national importance.


He said that such a summit was necessary to address issues threatening the national unity and existence of the country.

“We are calling on the Federal Government to launch an investigation into the killing of Afenifere Leader’s daughter, Mrs. Olakunri.

“The culprits must be brought to book to serve as a deterrent, ” he said.

Also speaking,  Mr Innocent  Ebhote, another youth leader, said that it was the duty of the government to secure lives and maintain law and order in the country.

”This is why the coalition is calling on the government to do the needful by protecting the lives and property of Nigerians,” he said.

Also, Mr Eric  Oluwole,  South West Youth Leader, said that there was a need to boost security in the southern part of the country.