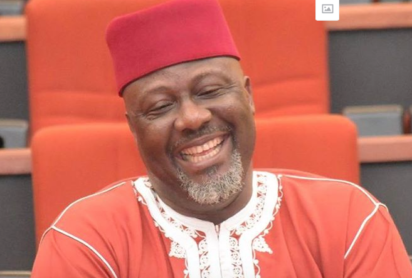 Senator Dino Melaye (PDP-Kogi West), on Saturday joked that he had become a member of the Miyetti Allah Cattle Breeders Association of Nigeria and deserved a share of the Ruga Settlement.

He said he received 104 cows from sympathisers following the death of his mother Deaconess Comfort Melaye and this made him qualified to join Miyetti Allah.

He stated this at the funeral service for Deaconess Melaye in Aiyetoro-Gbedde, Ijumu local government, Kogi State

Dignitaries at the Thanksgiving Service at The Apostolic Church of Nigeria, Oke-Ayo Assembly, Iluafon Quarters, included representative of the President and Special Adviser on National Assembly Matters, Senator Ita Enang who delivered President Mohammadu Buhari’s letter of condolence, and the representative of the Chief of Army Staff.

Royal fathers were not left out, with the presence of the representatives of the Sultan of Sokoto and that of the Ooni of Ife, the Emirs of Zaria and Bauchi and other traditional rulers from within and outside Kogi State.

Expressing his appreciation to the eminent Nigerians, including the Chief of Army Staff (COAS), General Tukur Buratai who stood by him following the demise of his mother, who he said also identified with him, Melaye alluded to the controversial but suspended Federal Government Ruga (cattle) settlement policy.

Melaye said that with the over 100 head of cattle he has received, he is “now a member of the Miyetti Allah’, and deserving a share of the Ruga Settlement.

“My sincere appreciation goes to the good people of this country, including the chief of army staff and several others that have identified with me and my family.

“During this period I have received 104 cows, and I can say I’m now a member of Miyetti Allah, and will thereby ask President Buhari to make available to me a Ruga Cattle settlement”, he quipped.

Melaye in his eulogy, related the many instances his mother stood by him, in the cause of his ‘just struggles’, saying that her prayers always made him prevail against his adversaries.

He added that his adversaries should therefore “beware, now that she is with the angels of God”.

The lawmaker later announced the donation of N5 million “in cash”, to the church, in addition to another N1 million donation by the PDP leadership.