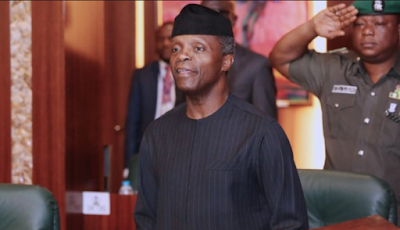 The federal government pledged yesterday to do more to enhance the physical development of the oil bearing communities in the Niger Delta in the next four years.

Giving the assurance on behalf of government was Vice President Yemi Osinbajo during a courtesy call on the the Ebenanaowei of Ogulagha Kingdom, HRM, Joseph Timiyan I, at Obotobo, Burutu Local Government area of Delta State.

Osinbajo noted that the development agencies created to fill gaps in the region had failed to live up to expectations.

The vice president, who was in Delta state to commission some projects, including the 20.29 KM Obotobo 1- Obotobo 11 – Sokebolou – Yokri Road in Ogulagha Kingdom and the Main Axial Road in Okerenkoko, Gbaramatu Kingdom in Warri South-West council area, said the federal government would consult with the state government to determine areas in need of development.


He was particularly unhappy that the Niger Delta Development Commission (NDDC) has not been able to meet the expectations of the people of the region.

“The NDDC, in many respects, has not met the expectations of the oil producing states,” he said.

“A lot of money is invested in NDDC and the Ministry of the Niger Delta because the real reason they were created is to speed up the development of oil-rich communities. We will sit with the Delta State Governor to look at specific areas to develop in the creeks.”

He commended Governor Ifeanyi Okowa for his achievements in a neighbourhood and area that had not had the type of roads commissioned yesterday.

“We commend him also on several other initiatives in this kingdom in particular, because this has been a very peaceful community and it is a host to several of our oil and gas assets.

“So, it really is a special pleasure to commission these roads and also thank His Royal Highness, (Elder, Capt) Joseph Timiyan, who has maintained the peace in this neighbourhood and who has shown true leadership by the way he has conducted the affairs of this area,” he said.

Governor Okowa, said the Vice President was invited to commission the projects because he visited the creeks in the pursuit of peace and an enabling environment for oil and gas production.

“It is not just the length of the road that makes this project unique; it is that the road is located right beside the Atlantic Ocean with all the human, material, ecological and financial implications that this difficult terrain presents; we did not know we could get this length of road in the creak until the King drew our attention to it.

“I am happy about the progress we have made so far. This has greatly helped to ensure peace in the state, which bodes well for uninterrupted oil production and the health of the national economy.

“We are continuing to use various structures and initiatives to ensure that the peace we have enjoyed in the last three years is sustained.”