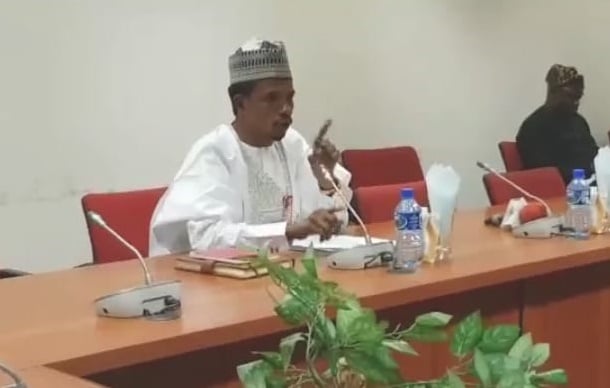 A video footage where Elisha Abboand Oluremi Tinubu, Nigerian senators, were seen engaging in a heated argument, has taken the front seat on social media platforms.

The duo were spotted, in the now-viral video, trading aggressive words during Abbo’s first hearing with the senate ad hoc committee set up to probe him.

The embattled lawmaker, who has been in the eye of the storm after a video of him assaulting a woman in a sextoy shop went viral, had apologised, but his action at the senate committee hearing on Tuesday sparked a heated argument with Tinubu, senator representing Lagos central.

Tinubu, however, retorted by telling him he was new in the senate and cannot tell the committee how to handle the hearing.

“You are just joining us. We have a procedure and we are also under the law. What we are doing, we are doing as a legislature. You don’t come in here when we invite you, despite you are our colleague, you are on the other side now,” she said.

The confrontation has since topped the menu on Twitter trends, where users have continued to register their differing views on the matter.

“If anything, I thank God for how Remi Tinubu handled the Elijah Abbo Session I thought he knew how to slap women, he should have gotten up to slap her for threatening him with suspension It was a case of one bully meeting a bigger bully in the schoolyard. You get what you give,” a Twitter user said.

“When Senator Remi Tinubu mentioned to a senator seated beside her that Abbo’s misdemeanour could be as a result of his age, I just hissed. That was a manifestation of what the political establishment think of us, younger people – as youthfully exuberant. That was not necessary,” another user said.

Here’s what Nigerians had to say:

If Senator Abbo was really apologetic and humbled, when Senator Remi Tinubu told him he could be suspended by the panel he would have been quiet and respectful and not talk back to her like a petulant child, he has not learnt his lesson and has no respect for women.
— Rhéma Ime-Albert (@MissRhemaAlbert) July 9, 2019

Sen Elisha Abbo is not a lily livered puppet you can Intimidate into submission especially coming from same woman who is notorious for male assault. Abbo is your colleague and not your son.Remi Tinubu was simply condescending and Abbo responded accordingly! You both can do better pic.twitter.com/KcOqi23mrn
— Ordinary Okey 🇳🇬 (@Okeydegeneral) July 10, 2019

I'm certain that if Senator Tinubu were a man, Nigerian men won't find what she said to Abbo ''condescending'' and ''disrespectful.'' Abbo still isn't remorseful and Senator Tinubu firmly exercising her position within the ambit of the law is what some of you can't stand. Lol. https://t.co/HTsVgTXt6X
— Bernard Dayo (@BernardDayo) July 10, 2019

Remi Tinubu and Abbo are two arrogant people playing their default personality roles. They both bleed arrogance and pride. Each had a point, but wrongly & rudely passed. pic.twitter.com/lIsRgpVCJx
— Kolade Akeni (@koladeakeni) July 10, 2019

If anything, I thank God for how Remi Tinubu handled the Elijah Abbo Session

I thought he knew how to slap women, he should have gotten up to slap her for threatening him with suspension

It was a case of one bully meeting a bigger bully in the schoolyard. You get what you give
— Samuel Korie (@korie_tweets) July 10, 2019

Last week senator Elisha Abbo beat up and humiliated a woman and all of you were outraged but today I'm seeing people defending the same man because Senator Remi Tinubu was scolding him for that same act.

You people are soo inconsistent, the bashing of Mrs. Tinubu is not right. pic.twitter.com/P3LnvOQ6It
— Ayatutu (@AyatutuKaSeTiv) July 10, 2019

When Senator Remi Tinubu mentioned to a senator seated beside her that Abbo’s misdemeanor could be as a result of his age, I just hissed. That was a manifestation of what the political establishment think of us, younger people - as youthfully exuberant. That was not necessary.
— Gimba Kakanda (@gimbakakanda) July 9, 2019

If you are a woman here and you are talking trash at Remi Tinubu for yelling at the slapping Senator, Shame on you!
Senator Remi spoke for all Nigerian women out there who couldn’t look up to that animal. She was even reminding him she is a woman too Incase he feels like slapping
— S.L.E.D.G.E 🔨 (@SledgeAma) July 9, 2019

Senator Elisha Abbo used to be married to an Igbo woman.
He used to beat her up mercilessly.

She is dead now.

Several cases of domestic violence reports against him when she was alive.
— Ndi Kato (@YarKafanchan) July 4, 2019

I get it. She's not a saint. Perhaps she deserves her own hearing too. And if it happens we will discuss it in context. But this is a hearing for Elisha Abbo and he was out of order. https://t.co/VOKMULWPGL
— Amara Nwankpa (@Nwankpa_A) July 10, 2019

Sen.Remi Tinubu spoke carelessly & arrogantly.When Sen.Abbo tried returning fire;she reminded him that she is another woman. Is she telling us that if you are a woman you have an automatic license to behave roughly & rudely to colleagues? https://t.co/RQ0WpRMjiP
— John Danfulani (@john_danfulani) July 9, 2019

Senator Abbo is obviously a compulsively violent bully, but his infantilization by Remi Tinubu is intolerably insulting & unacceptable. Like Abbo, Remi was also 41 years old when she first became a senator in 2011. Did anyone denigrate her age in 2011? When did 41 become "young"?
— Farooq Kperogi, Ph.D (@farooqkperogi) July 10, 2019

Sen. Abbo had done an unforgivable action toward a pregnant lady and he most be punished accordingly, to me, even going to a sex toy shop is an offence, he should have send someone for that. But please i have to condemed d process of his treatment(trial).
— I'm not ur Mate🤷🏾 (@AhmadIAAziz) July 10, 2019

Abbo has issues with women talking back at him. Remi Tinubu was condescending and lacks communication skills.
If the other senators were not there, Abbo would pressed ⬇️⬇️➡️❎ pic.twitter.com/gUHtWkzNLf
— Daniel Willoughby (@Sir_Willoh) July 10, 2019

Something is worrying Nigerians,Elisha Abbo slapped a woman ON CAMERA and people are mad because Remi Tinubu didn’t talk to him with “respect”. She has every right to talk to him the way she did;it’s a DISCIPLINARY hearing and he disrespected every senator through his actions. pic.twitter.com/wu7xNC7azs
— Esther 🌺 (@SimplyAYT_) July 9, 2019

Remi Tinubu is a clear example of someone who through her husband's influence and manipulations got fixed into a revered office without being oriented. It's a pity a good number of our legislators don't know what the constitution provides. pic.twitter.com/49cOAlqxRj
— The Retired General 🇳🇬🇳🇬 (@MartinsAniobi) July 9, 2019

So Senator Remi Tinubu that assaulted Obanikoro right inside the Red Chamber is now probing another Senator for assault?

Kudos to Remi Tinubu for not allowing this scumbag, Elisha Abbo intimidate her.