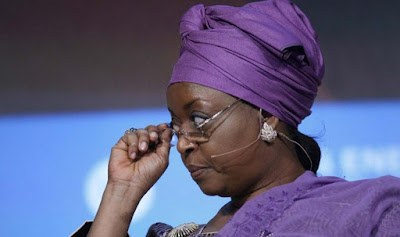 Diezani, a former Minister of Petroleum, who is being prosecuted by the UK government on issues of corruption.

EFCC spokesman, Mr Tony Orilade in a statement in Abuja on Wednesday, quoted Magu to have said this when he received the team of International Criminal Police Organisation (InterPol) in his office.

Magu regreted that the matter had dragged on in the UK for more than four years with no visible result and no end in sight.


“There is the case of Diezani which has been going on for over four years and the amount involved is about 2.4 billion dollars and no kobo has been recovered from overseas.

“Though, we have recovered some of the proceeds of the crime, we are still tracing others,” he said.

Magu, however, noted that the commission’s relationship with InterPol had made it easier to place suspects on red notice.

He disclosed that getting Diezani, Dan Etete, (former petroleum minister), Mohammed Adoke (former attorney general and minister of justice), all of whom are overseas and facing fraud cases in Nigeria, back to the country had been a problem.

He, therefore, urged their new countries of residence to either prosecute them or hand them over to Nigeria “since they are Nigerians.”

According to the statement, InterPol’s Coordinator on Anti-corruption, Mr Sebastian Bley, commended the efforts of the EFCC in the fight against corruption.

“We are fostering our relationship with selected law enforcement agencies in Nigeria because we are doing a set of activities which have been fruitful.

“One area we will need to be stronger is the area of case coordination support,” he said.