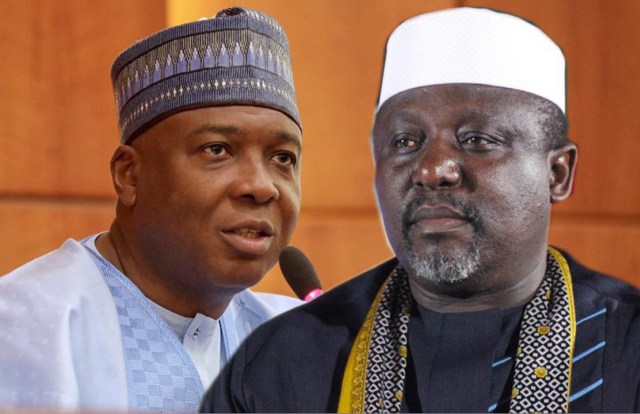 The Economic and Financial Crimes Commission (EFCC) has accused Justice Taiwo Taiwo of the Federal High Court in Abuja of exhibiting bias in favour of former Senate President, Bukola Saraki and the immediate past Governor of Imo State, Rochas Okorcha, in his handling of the cases they filed.

The allegation is contained in two fresh motions the EFCC filed before the court, demanding the withdrawal of Justice Taiwo from the two fundamental rights enforcement cases filed by Saraki and Okocha.

The EFCC said although it did not hope to always win its cases before the judge, the trend of Justice Taiwo’s orders in cases where it was conducting corruption/financial crimes investigations, made it difficult for it (the EFCC) to believe in the judge’s impartiality.

The commission resorted to filing the fresh motion following the refusal by the court’s Chief Judge, Justice Adamu Kafarati to transfer the cases from Justice Taiwo’s court, as requested by the EFCC in a petition it earlier wrote against the judge.


The grounds, on which the EFCC based its fresh motions, include that: “His Lordship while sitting in Ekiti Judicial Division of the Federal High Court had in two previous cases involving former Governor of Ekiti State, Ayo Fayose, Attorney-General of Ekiti State and officials of Ekiti State Government given orders/decisions wherein the 4th respondent/applicant’s statutory powers to investigate economic and financial crimes were curtailed and gagged contrary to the established principles by superior courts.

“The 4th respondent/applicant does not expect to always win its cases before this honourable court, but the trend of decisions/orders being made against it by my lord in cases where it is conducting corruption/financial crimes investigations. has made it difficult for it to believe in my lord’s impartiality.

“The 4th respondent/applicant had petitioned the Chief Judge of the Federal High Court seeking that this matter be re-assigned from my Lord’s court to another court, and the Chief Judge advised that a formal motion be filed to that effect.”

The EFCC stated: “Without considering the merit in the application vis a vis the venue of the alleged violation of the fundamental rights, the court made an interlocutory order without hearing from the respondents applicant.

“It is well established legal principle that no court has the power to stop the investigative powers of the 4th respondent or any agency established under the laws to investigate crimes.”

The commission argued that the orders issued by the court on May 9 and May 14, 2019 restrained it from performing its statutory duty.

Other respondents in both cases the Attorney-General of the Federation (AGF), the Department of State Services (DSS), the Inspector-General of Police (IGP), the Independent Corrupt Practices and other related offences Commission (ICPC) and the Code of Conduct Bureau.

The EFCC had, in its earlier petition to Justice Kafarati, May 21, 2019, accused Justice Taiwo of being bias against it.

In the petition, signed by the EFCC’s acting Chairman, Ibrahim Magu, the commission equally complained about the ex parte orders made by Justice Taiwo on May 9 and 14, restraining the commission from continuing its investigations of certain corruption allegations against Saraki, and Okorocha.

It requested in the petition the re-assignment of the two men’s cases and all other ones involving it in the judge’s docket to another judge of the court.

It also recalled in the petition how the judge, out of alleged bias while sitting in the Ado-Ekiti Division of the court, gave rulings in favour of a former Governor of Ekiti State, Ayo Fayose.

In their separate responses, Okorocha and Saraki urged Justice Kafarati to ignore the request by the EFCC, arguing that it was baseless.

Saraki and Okorocha also contended that the orders made in their favour by the judge were justified owing to the circumstances of alleged harassment by the commission leading to their decision to file the cases in which the judge issued the restraining orders.

When the cases came up on Thursday, Justice Taiwo drew parties’ attention to the fresh motions by the EFCC,to which lawyers to Saraki and Okorocha sought time to respond to.

The judge consequently adjourned both cases till September 27, 2019 for the hearing of the motions.