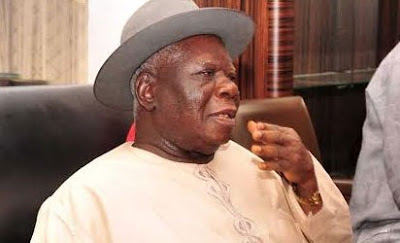 Clark, in a statement made available to the media in Warri on Wednesday, also said the attempts by Chief Osoba to bury the importance of the 2014 National Conference and replace same with the El-Rufai Committee Report, was unsavoury.

According to him, suggesting the replacement of the confab with a committee report was equivalent to sacrificing national interest on the altar of partisan politics.

Clark’s statement, titled “Chief Segun Osoba at 80; and the question of Restructuring” opened by congratulating the ex-governor for clocking 80 years, before going on to reflect on his comment at the event of the ceremony that marked the celebration.


The PANDEF leader recalled that he (Chief Osoba) was part of the process that produced the 2014 National Conference Report; pointing out that the call for restructuring is primarily targeted at ensuring that the subject of true federalism is given proper attention and eventually allowed in Nigeria, has always been a topic of issue in the country.

He added that as a senior citizen, close to President Muhammadu Buhari, he (Chief Osoba) is expected to lend his voice to achieving the adoption of the confab report by the Nigerian government.

He said, “I read Chief Osoba’s comments, during the launch of his book, titled: ‘Battlelines: Adventures in Journalism and Politics’, to mark his 80th birthday, he was reported to have described ‘those shouting Restructuring should realize that the power rests with the National Assembly. We have to rearrange our system. The El-Rufai report should be sent to the National Assembly. If anybody thinks Buhari can change anything by decree, it is not possible’

“Unfortunately, It is most uncharitable of Chief Osoba to refer to the agitators of the question of Restructuring, in such a shabby manner. Chief Osoba should be reminded that, most of the people who have congregated under the Southern and Middle Belt Forum (SMBLF) were members of the 2014 National Conference of which he was a very active member.

“The National Conference which comprised 492 Nigerians drawn from all walks of life made over 600 recommendations. The Conference is aware that, there are parts of this Reports that could only be achieved by means of Executive Decisions, while there are aspects of the Report that must necessarily pass through the National Assembly, that will give rise to constitutional amendments or writing a new constitution, altogether.

“The National Confab, in anticipating this latter scenario, went a step further to provide a draft Constitution, reflecting the aims, aspirations, principles, spirit and letter of the National Conference, which was submitted to Government.

“Chief Osoba is aware that, True Federalism, a byword of the subject of Restructuring, has always been a part and parcel of our evolution process.

“The AFENIFERE of the Southwest which Chief Osoba belongs and represented at the National Conference do not believe that it is the so called El Rufai Committee that would deliver a restructured Nigeria, other than the 2014 Confab Report.

“By his level and pedigree, it was not expected of Chief Osoba to now advise President Muhammad Buhari to send the El-Rufai Report to the National Assembly, reducing this all important subject of Restructuring to a mere political-orientated El-Rufai Committee report, which was hurriedly produced on the eve of the 2019 elections, to hoodwink unsuspecting Nigerians.

“There is nothing in the El Rufai report which is not contained in the 2014 National conference. There was every opportunity for the government of PMB to present the El Rufai Reports, culled and doctored from the 2014 Conference Report, to National Assembly, before the 2019 election, if in deed, they were sincere and patriotic, and that, relegating it to arena of such an unpatriotic partisan affair is most uncharitable of Chief Segun Osoba.

“The question of Restructuring remains the most patriotic discourse which any lover of the country must buy into, and so, not to be commandeered into parochial political partisanship, as Chief Osoba tended to portray,” he said.