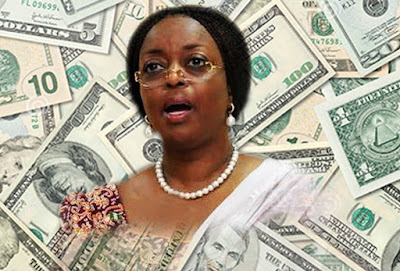 A Deputy Director of the Independent National Electoral Commission, Auwal Jibrin, has been sentenced to six years in jail for benefiting from the $115.010m largesse of a former Minister of Petroleum, Diezani Alison-Madueke, in the run-up to the 2015 presidential election.

Justice Yusuf Birnin-Kudu of Jigawa State High Court sitting in Gumel has sentenced Jibrin to jail alongside one Garba Ismaila who bagged seven years in jail.

The two men were sentenced on Friday following their prosecution by the Economic and Financial Crimes Commission, Kano zonal office.

Acting EFCC spokesman, Tony Orilade, who disclosed this in a statement in Abuja on Sunday, said the two convicts received N45m out of the N250m disbursed in Jigawa State to influence the outcome of the 2015 elections.


Jibrin and Ismaila had pleaded ‘not guilty’ to the six and seven counts against them respectively, thereby setting the stage for full trial during which the prosecution presented five witnesses and tendered 20 exhibits against them.

Delivering judgment, Justice Birnin-Kudu held that the prosecution proved beyond a reasonable doubt “all the elements and facts of the case as contained in the charge and the testimonies of prosecution witnesses and exhibits tendered.”

He added that the defence team failed to counter the evidence presented by the prosecution through its witnesses.

The court thus found the first defendant guilty as charged on count two, while the second defendant was found guilty on counts one and three.

The court, however, discharged them on counts four, five and six.

The judge further ordered the final forfeiture of the recovered monies and property attached to the investigation with the exception of a three-bedroom flat attached at No. 1 Hadejia Road, Birnin Kudu , Jigawa State.