Can you Abba ‘Kyari’ me to President Buhari? 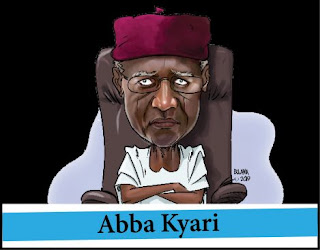 He is omniscient and directs the affairs of the Nigerian state even while asleep. His word is law; his gesture carries more weight than the pronouncement of the Supreme Court.

He is the Diviner, Mastermind and Executor of the ‘Acts of Aso Rock’. His powers are limitless; he holds the key to all appointments. He is sought after by the mighty and power seekers. The Nigerian Presidency is made in his image and likeness. Strange that people would arrogate such absolute powers to a single individual and expect over 200 million Nigerians to share their folly. Strange

Since Abba Kyari emerged as Presdent Muhammadu Buhari’s Chief of Staff on August 27 2015, his tenure has been dogged by endless commentaries about his invincibility. All will be well with you if you can get someone to ‘Kyari’ you to President Muhammadu Buhari. Really? At this rate, it would not be far-fetched to even hear people extending his might to the 36 states including the FCT. Isn’t this a lazy and disingenuous ploy by the political class aimed at providing a diversionary narrative?

Can it possibly be that Abba Kyari has opted not to do the “needful” in deference to his conscience and training? How can the far reaching decisions of governance in Nigeria be at the command of an individual when we have 109 Senators, 360 Representatives, 36 Governors as well as hundreds of ministers, Senior Special Advisers, Special Assistants and aides in Nigeria?

The often bickering and fence-mending political class will have us believe that Abba Kyari is the man behind the mask – well, that has become a tuneless refrain. Something tells me that the diatribe against him is probably because Kyari has remained unbending in his commitment to serving President Buhari with honour. It appears that for once, the political class has to contend with a Chief Of Staff that is committed to Nigeria and the President.

They most likely did not bank on encountering a Chief of Staff that is unwilling to do the “needful”.

A critical analysis of the allegations that have been made against Abba Kyari will reveal a trend that suggests an obvious campaign to get rid of the diminutive lawyer. Their endless attacks have swayed the unsuspecting into believing Kyari is the enemy of State.

Why is there so much angst and concerted onslaught against Abba Kyari? At the risk of being dubbed an ‘Abba Kyari Apologist’, one must stress that the nation needs to shift its focus from the ‘Kyari distraction’ to the urgent need of rebuilding our nation. The protagonists of the ‘Kyari Must Go’ campaign should know by now that the ploy has failed – at least, thus far. If President Buhari decides to work with Kyari as his Chief Of Staff, then he must have his reasons.

Heaven knows that job requires all the intellect, tact, presence of mind and stamina one can muster. It is one that opens the occupant of the ‘hot seat’ up to a lot of attacks and requests from those who want to have the President’s ears – by all means. What President Buhari and in fact, his Chief of Staff Abba Kyari need now is the support of all Nigerians.

Nigeria needs to move ahead quickly in her march towards tackling the mounting challenges across the nation. We should be more agitated about the violence, hunger, deaths and corruption in our great nation. For those hoping for people that can ‘Kyari’ them to the President, the game is up.