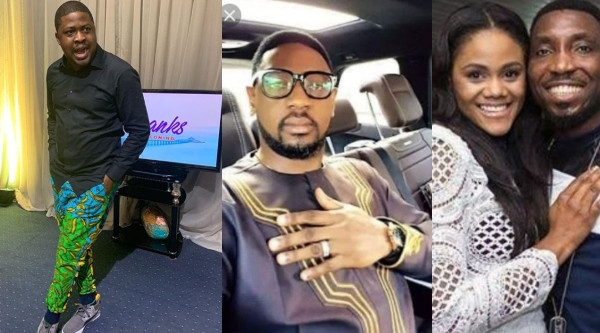 Just after Timi Dakolo debunked claims of Pastor Biodun Fatoyinbo officiating his wedding to Busola, Pastor Yemi Davids of Global Impact church has also confirmed that the couple got married in his church.

Pastor Yemi Davids who also revealed that he has been privy to some personal struggles Busola has had over the years, stated that what she said is her truth and should be honored even though there was a denial.


The Global Impact church Pastor who stated that he supports any process that will bring justice, healing and resolution in the matter, wrote;

Hmmm I feel the need to do this as a husband, father and Pastor. @busoladakolo got married from our church to @timidakolo and as a friend to the family, I've been privy to some of the personal struggle Busola has had over the years, based on the details she expressed at the recent interview. This is her truth and it should be honored.

I commend her for her bravery and I pray this helps her healing process. I also noticed that there was a denial of the allegation. It is important that the truth comes out. Rape is a serious offense and it is unacceptable. A process that unveils the truth in this hurtful situation in the body must begin immediately. We leaders must be accountable and I support at arriving at Justice, Healing and Resolution at this matter. #TruthSetsFree #SayNoToRape


Celebrity stylist, Uche Nnaji who styled Timi during his wedding took the his comment section to corroborate with Timi's claim. He had this to say:


Timi thank you oooo! Below is what I have been sharing since Saturday to peddlers of evil rumors.

Good afternoon All,
Please allow me to throw abit of light into this forwarded message that is been circulated even on this estate platform . And not just because we have been friends for 11yrs counting (starting with Mnet coming to me to dress 2 of their finalist called Eric of blessed memory but also Timi) but also because as someone who dressed him for their wedding in Ilorin which never held in a church building, talkless COZA (And yes that was because she was pregnant and you knpw no church would wed them🙏🏿) Ilorin .
May I also mention that as Busola’s former pastor and FAMILY FRIEND , Pst Biodun was conspicuously absent at their wedding.Worry not thinking if I would have known him then to be sure if he even there at the wedding , because at that time just like other men of STYLE. who wanted to wear well tailored suits , Pst Biodun was one of such frequent pilgrims who visited the sartorial Mecca at Onigbogbo-Maryland. so I knew him.

And before this Timi already relocated from PH where he was a choir member at HOTR PH and started attending HOTR Lagos where he refused to function in official capacity in the choir but was periodically asked to do a special song .
10yrs counting he has been in HOTR Lagos and refused to be termed a choir member as he pursued his music career refusing it to conflict with church code of conducts. So I wonder at what point did this fellow leave HOTR Lagos to go be a CHOIR MASTER in an Abuja church ?😊. YES , Busola was a choir member at COZA Ilorin, way before the West Africa Idols and was already a staff of Zenith Bank at Ajose Adeogun Victoria Island LAGOS where her female colleagues used to mock her for dating a Blue Picanto driving singer.

So dear fellow residents who might be tempted to advance such false tales, Timi Dakolo, Never attended COZA , They never got married in COZA and he has never been a Choir master in any church in the world that I as Family friends is aware of. 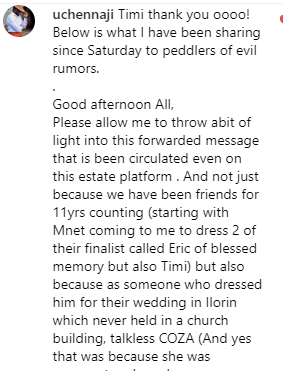 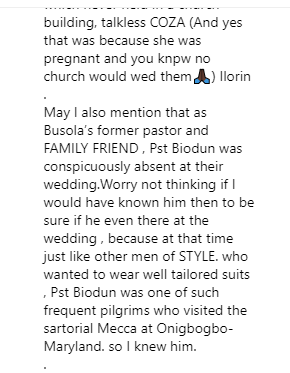 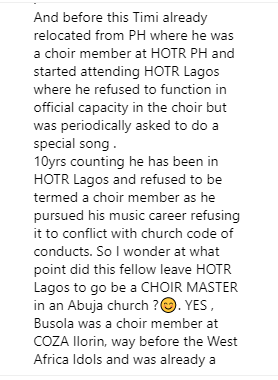 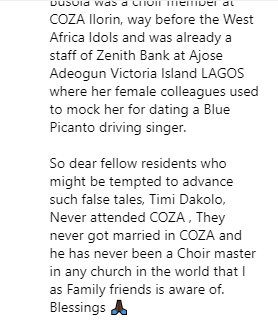