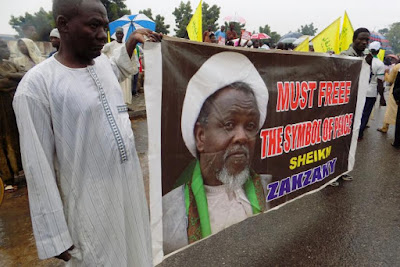 The Islamic Movement in Nigeria (IMN) also known as Shiites have stated that the fate of its leader Sheikh Ibrahim El-Zakzaky lies in the hands of President Muhammadu Buhari.

It was gathered that the presidency on Friday told Shiite members to allow the court to decide the fate of their leader.

In the statement, the FG appealed to the Shiite members to desist from needless violent, street protests and await the decision of the court in Kaduna where their leader is currently being tried.

Reacting in a statement on Sunday, the President Media Forum of IMN, Ibrahim Musa, accused Buhari of disobeying court orders that directed the release of El-Zakzaky.


He said: “In December 2016 the Federal High Court in Abuja freed Sheikh Zakzaky from the illegal detention, ordered that he, along with his wife, be compensated to the tune of N50m, a house be provided for him in any part of the country he desires and security be provided for his protection.

“The Buhari government deliberately acted in contempt of court and refused to respect the judiciary. So which court is the presidency talking about that will decide the fate of our leader?”

Shiites noted that the fresh court case instituted by the Kaduna state government was a mischievous plot to keep its leader in detention.

“That the government mischievously concocted a new case in Kaduna, three years after the Zaria massacre, accusing the leader of the movement whose wife was shot, three children were killed, elder sister and nephew were burned alive and he was also shot severally, of abetting homicide.

“This was followed by a case in which over 100 members of the movement were freed by the High Court in Kaduna with a ‘No Case Submission’ implying that the case was the only mischief of keeping the revered leader in illegal detention,” the statement added.