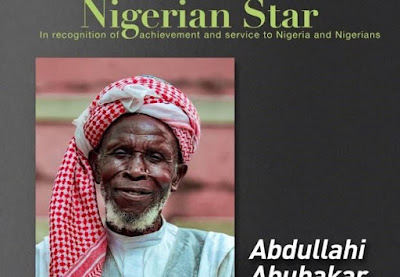 President Buhari has expressed delight at the International Religious Freedom Award conferred on Imam Abubakar Abdullahi of Nigeria by the U.S. Department of State.

On behalf of the Federal Government, President Buhari heartily congratulated Imam Abubakar on the well-deserved honour by no less a credible and formidable government agency of the United States.

The President, in a statement by the Senior Special Assistant on Media and publicity, Garba Shehu, believed the recognition bestowed on the 83-year-old Muslim cleric is towering and befitting for the patriot who risked his own life and that of his family on June 23, 2018 to save the lives of hundreds of Christians, fleeing from attacks by suspected bandits in Yelwan Gidin Akwati, Swei and Nghar villages in Barkin Ladi Local Government Area of Plateau State.

Like Vice President Yemi Osinbajo said, on May 30, 2019 at the State House Abuja when he received the Imam, the Village Head, Damafulul Mangai; community leaders and a delegation from the US, UK and European Union, the cleric ‘‘has done so much to promote peace by his singular act than most politicians could do and deserve all the commendation and high honour.’’


President Buhari is, therefore, elated that a Nigerian national has written his name in gold in the international arena and his deeds will resonate wherever and whenever there are discussions on religious tolerance, cordiality between Christians and Muslims in the country and around the world.

The President recommended the sterling virtues of Imam Abdullahi to all clerics, in particular, and Nigerians in general.

He also strongly affirmed the commitment of this administration to freedom of religion and worship for all Nigerians, as guaranteed by the Constitution.

He stressed that under no circumstance will any religion or faith be imposed on the nation.