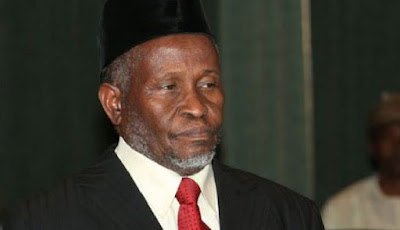 The Senate on Wednesday confirmed the appointment of Justice Tanko Muhammad as the substantive Chief Justice of Nigeria.

The red chamber had, on arrival of Muhammad into the chamber, gone into a closed session to set the template for the screening.

Muhammad, who arrived at the Senate at around 10:10am, was ushered into the chamber around 11:13am.

He was accompanied to the red chamber by top judiciary officers in the country.

The CJN answered questions on corruption, administration of criminal justice and the poor funding of the judiciary

Muhammad has been acting CJN since January 25 when the then CJN, Justice Walter Onnoghen, was suspended from office over alleged corrupt practices.

President Muhammadu Buhari had, last Thursday, forwarded to the Senate a letter requesting the confirmation of Muhammad as substantive Chief Justice of Nigeria.

The President, in the letter of request, said the nomination was sequel to recommendation made to that effect by the National Judicial Council.

“It is my hope that this request will receive the usual expeditious consideration of the distinguished Senate of the Federal Republic of Nigeria.”

In making the confirmation expeditiously, the Senate listed it on its order paper on Tuesday, upon which it resolved to carry out the screening at the committee of the whole on Wednesday, July 17, 2019 (today) .

The President of the Senate, Ahmad Lawan, said all the relevant credentials of the acting CJN have been distributed to all the senators for required perusal.

He said, “Distinguished colleagues, please study the documents already distributed in preparation for screening and possible confirmation of Hon. Justice Ibrahim Tanko Muhammad as Chief Justice of Nigeria,” he said.