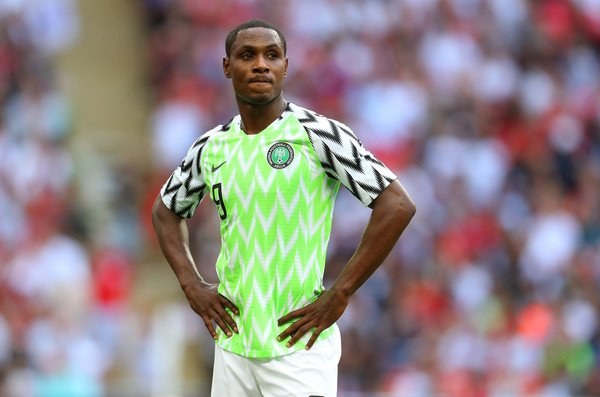 Super Eagles forward Odion Jude Ighalo has called it a day with the National team, shortly after Skipper John Mikel Obi made his retirement official.

The 30-year-old scored the winner against the Carthage Eagles in the third-place match but limped off in the 44th minute following a knee injury.

Sources told ESPN that Ighalo, whose goal helped Nigeria to beat Tunisia 1-0 in the 2019 Africa Cup of Nations Bronze Final on Wednesday night, informed coach Gernot Rohr of his decision before leaving to join his club in China immediately after the game.

"He had discussed his decision with the coach before the third-place match, saying that the constant abuse was taking a toll on his young family, but he was advised to keep it under wraps for the moment," the sources told ESPN.

"After the game, he gave his jersey as a souvenir to the coach, said his goodbyes and left."

Prior to the game, the 30-year-old posted a message on his WhatsApp status update that simply said "Final Game".


"He has been very strong for us," Rohr told ESPN.

"And it is sad that he wants not to continue.

"But the door always is open for him any time."

Ighalo made his Super Eagles debut under the tutelage of Daniel Amokachi in 2015 and later played his first competition with the senior team at the 2018 World Cup in Russia.

He came under huge criticisms when Nigeria were eliminated from the 2018 World Cup after missing a glaring chance against Argentina which could have given the Super Eagles a 2-1 lead.

But the former Watford forward bounced back to become the highest goal scorer for the 2019 AFCON tournament qualifiers, notching up seven goals in the process.

Ighalo is now a strong contender for the Golden Boot award at AFCON with five goals as Senegal’s Sadio Mane and Algeria’s Adam Ounas are closest with the three goals.