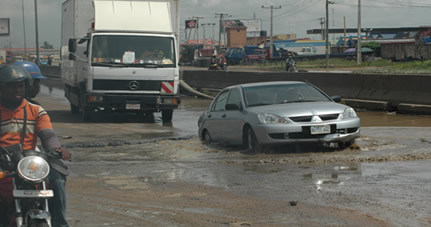 The Federal Road Maintenance Agency on Tuesday declared that it had been unable to access the over N64bn road maintenance fund that was meant to come from a particular percentage of petroleum products sale.

FERMA’s Managing Director, Nurudeen Rafindadi, who disclosed this in Abuja after the inauguration of the board of the agency, noted that the organisation’s inability to access the fund had further constrained its performance in terms of maintaining federal roads.

He said, “We have to appeal for the implementation of some aspects of the FERMA Act, which will enable us to raise resources and finance. You are aware of that stipulation in the Act that is actually meant to help accrue funds from the price of petroleum products. That is not being implemented right now.


“But if we are able to achieve that, it can double, or, even more, the kind of financing that we get for the maintenance of roads and the public will see so much difference on our roads.”

When probed further on whether the agency had accessed the fund at any time, Rafindadi replied, “We have not started accessing the fund. There are a lot of intricacies in the modalities of accessing it.

“What I know is that since the amendment of the Act in 2007, that money has been accruing somewhere and we are trying to gather the capacity to be able to find that out.

“We also know that it will double the capital allocation that we get annually. But with the calibre of board we have now and with the support they will garner from FERMA, I think we will make a lot of headway on that.”

Rafindadi noted that the capital allocation to the agency in 2018 was N32bn, but was quick to state that less than 50 per cent of that sum was released to FERMA.

Earlier, the newly inaugurated FERMA Board Chairman, Tunde Lemo, stated that the agency would go all out to access the fund, as the board would work hard to achieve such.

He said, “FERMA is a unique agency in the sense that it does not depend only on appropriation. There are other income lines of FERMA that are not known to the public and what this board plans to do is to ensure that all of that are put on the table so that we can have enough resources to run our programmes.

“For instance, anytime you drive to the filling station and you pay (for petroleum products), a percentage of what you pay goes to FERMA account. The agency is also empowered to raise funds through some other means.”

Lemo also expressed hope that the government would consider a robust appropriation for FERMA in order to enable the agency to deliver better roads for Nigeria and Nigerians.