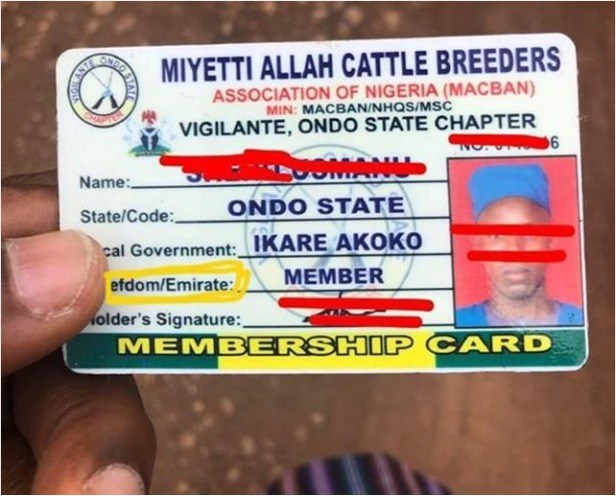 The Ondo State Government and the Yoruba socio-political group, Afenifere, have opposed a vigilante group set up by the Fulani herdsmen in the state.

While the Afenifere on Monday described the group an affront to the Yoruba, the Ondo State Government said it had ordered the arrest of members of the group.

Pictures of a legal practitioner, Kayode Ajulo, and some suspected Fulani herdsmen, who mounted a roadblock in Ondo State, were trending on the social media on Monday.

An identity card of one of the armed herdsmen, on the social media, indicated that they were members of Miyetti Allah Cattle Breeders Association of Nigeria and they belonged to the Ikare-Akoko branch of the association.

The logo of the vigilante group was two guns while the code was MACBAN/NHQ/MSC.

Ajulo, in an interview with one of our correspondents, said the issue of security should be well taken care of and should not be politicised. He narrated his encounter with the controversial Fulani vigilante group on the telephone.

He said, “ If it comes to the issue of security, we must secure our lives and property. When it comes to politics, it is something else. We should not mix security with politics.

“ I was in Ondo State on Friday till Sunday because my mother was given a chieftaincy title at an Anglican Church in Akoko. On our way back, we got to Erusu, Igashi and around Akoko South-East that is where we saw these Fulani men carrying gun and cutlass. And I remember when we had Oodua Are Onakakanfo meeting; I happened to be the Mayegun Are Ona Kankanfo of Yorubaland and we said anybody seen with a gun must be accosted to know what he is doing with the gun.

“I was really mad. Some policemen later joined us. From my understanding, they have been there for long. But my worry is that if there is a Fulani vigilante group, where are the locals? Like I tell people, killing has been taking place everywhere. It should not lead to politics.”

Also, Ajulo, during an interview on Channels Television’s Sunrise Daily in Abuja on Monday, said he saw Fulani herdsmen with cattle, guns and cutlasses and they showed me their ID cards that they were vigilantes and they were the ones securing the highway.

“I took pictures of their ID cards and I questioned them and they said the police were aware of what they were doing.”

Ajulo, who is a staunch supporter of President Muhammadu Buhari, said he had always been of the opinion that the herdsmen/farmers crisis should not be given an ethnic coloration but his recent experience had altered his stance.

He noted that most security guards in the South-West were persons of northern extraction, but said his recent encounter was enough to put fear in the minds of Yoruba people.

Ajulo added, “The South-East is saying they don’t want Fulani herdsmen in their land but they are now in Yorubaland. This is real. Mind you, we are not castigating anybody. I lived in Lagos and in Ibadan and our security guards were usually northerners and we didn’t have any problem with them.

“But when things start happening, people will need to talk. The question is what are they doing there? Where are the police? They have abandoned the roads for these people (herdsmen) and you don’t expect people to talk?”He said there was a need to take urgent action to prevent bloodshed in the country.”

The Forward Buhari convener, however, admitted that the herdsmen did not act violently towards his entourage as they willingly allowed him to take their pictures and photos of their ID cards.

He also debunked the account that he was stopped by Fulani herdsmen.

“Our interaction is a voluntary undertaking as part of my profiling as a discerning leader of my community, desirous of curbing the menace of insecurity in Nigeria,” he stated.

But the state government said it was not aware of the existence of the group. The state government in a statement issued by the Commissioner for Information, Mr. Donald Ojogo, said it had called for the arrest of the unauthorized group or persons claiming to be Fulani vigilantes in the state.

The statement read, “The Ondo State Government observes with concern trending pictures of identity card carrying men identified as Fulani vigilantes in the Akoko area of the state. Various claims have been as regards the activities, duties as well as supposed mandate of these men in question.

“It is pertinent to recall that at the height of the incessant kidnap cases, the Ondo State Government took some far-reaching drastic measures which included marching orders to the law-abiding Hausa/Fulani leadership in the area to fish out criminal elements among them who took advantage of the rosy relationship between the indigenes and their law-abiding guests.

“As a measure to curb and possibly, stamp out cases of kidnap in the area, the Hausa/Fulani leadership was directed to select a handful of trusted men amongst them who could serve as tour guards in the thick forest as security agencies prepared to comb the forests. This measure yielded results.”

“It is important to note however, that while government appreciates the efforts of those who volunteered to provide information and served as tour guards to the security agencies in the ongoing operations in the area, it will not tolerate any unathourised move by any group to take an undue advantage of the current state of insecurity in the country.

“ Succinctly, government, having been unaware of any such identity card carrying persons in the name of a vigilante group, has directed security agencies to get to the root of the matter and apprehend any such person or group of persons operating in that manner.”

It’s an affront to Yorubaland – Afenifere


In the same vein, the Afenifere, said the development was not good for the security of the Yorubaland.

Speaking with newsmen, the Publicity Secretary of the Afenifere, Mr. Yinka Odumakin, said, “We have seen the pictures. It is a big affront to the Yoruba nation that the Fulani vigilante has now been set up throughout the Yorubaland, carrying arms, mounting checkpoints when our own elected governors would not be allowed to set up state police.”

He added, “ We now have bandits, terrorists, carrying guns on our streets, even mounting roadblocks. This is a monumental tragedy for our nation. This means the Buhari administration does not mean well for the unity of this country.”

The group called on the Ondo State Government to stop immediately the “illegal occupation of our land within the shortest possible time, and if they refused to do we would not restrain our people from confronting them.”