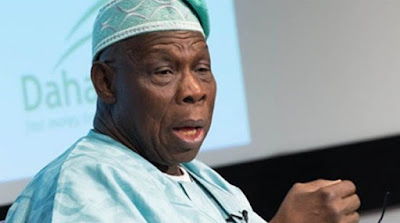 The Arewa Consultative Forum, ACF, has observed that former President Obasanjo lacks the moral standing to make any damning statements against any government in the country.

Former President Obasanjo recently in an open letter to President Buhari raised issues which mostly bordered on insecurity, among others in the country.

Muhammad Ibrahim Biu, ACF National Publicity Secretary in a statement of reply to Obasanjo’s letter to President Buhari said, “As far as the ACF and indeed the North is concerned, Chief Obasanjo lacks the moral standing to make any damning statements against any government considering his antecedents while at the helm of affairs as President.

“His statements and comments on national issues are neither driven by altruism nor by patriotism, but sheer self aggrandizement.

“What, we must ask, motivates Chief Obasanjo’s current divisive activities? His recent outburst on ‘Islamization’, Fulanization’, and ‘Northernization’ are clearly calculated at causing division and acrimony along religious, ethnic and regional lines which is most unfortunate.”

ACF noted that the former President knows more than any other Nigerian that there is no such thing as Islamization or Fulanization in the North’s agenda, adding, “Enemies of the North chose to propagate such negative narratives only with the view to causing disharmony among undiscerning Nigerians.

“Unfortunately many, including the highly educated and politically sophisticated elites have unwittingly fallen into the trap of believing in Obasanjo and his ilk.”

The forum noted with sadness how the negative stereotype associated with the issue of “Fulani herdsmen” is gradually degenerating into a national crisis.

“We find the assertion that every crime committed in, especially the southern part of the country, as being committed by Fulani herdsmen, irresponsible and deliberately aimed at achieving some certain diabolical objectives.

“The narration that every criminal, armed robbers and kidnappers are Fulani herdsmen because a Fulani man is at helm of affairs is a dangerous precedent which has to stop. Criminals must be regarded as criminals without giving them any ethnic, religious or regional coloration,” ACF queries.

The forum believed that Chief Obasanjo used the privilege to raiset he issues, which mostly bordered on insecurity in his latest letter, stressing, “It must, however, be noted that the issues are not new to Nigerians as he had raised them in his previous open letters to the President, so also other Nigerians in different fora.

“All the same, in exercising our right to comment on the letter, it is our candid opinion that Chief Obasanjo being a former President and an elder statesman who has unfettered access to the President should use a better and most civilized way of communicating his views to a sitting President rather than going public to create unnecessary scene and try to bring down the roof.”

ACF said that Chief Obasanjo has become relentless in his self-appointed task of a Cassandra-in- Chief for Nigeria, always proclaiming doomsday, predicting upheaval and bloodbath, which to say the least has diminished his acclaimed status as a patriot and nationalist.

ACF, therefore, called on groups and individuals who engage in such narratives to rise above such pettiness.

“We must realize that insurgency, banditry, kidnappings and armed robbery are our common enemies. We must join hands in finding a lasting solution to the menace.

“There is no gain saying the fact that the country is currently facing dire security challenges with its consequences, however, we must quickly add that the challenges are as a result of cumulative failures of past administrations advised.

The forum enjoined the President, more than ever before, should rejig the nation’s security apparatus for effective performance.

It appealed to the Federal Government to employ both security and political solutions to the various challenges facing the nation.