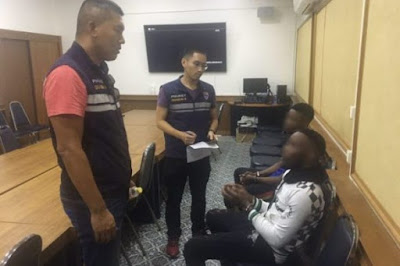 Two Nigerians, John Oquejiofor Ugwu and Ugochukwu Geoffrey Ofoma, have been declared wanted in Thailand in connection with an online romance scam the police said they have busted.

Court arrest warrants have been obtained for the Nigerians now on the run.

Meanwhile, three Thais working for the Nigerian-led online scam in Udon Thani province have been arrested while fleeing to the South, Bangkok Post reported.


Pol Lt Gen Surachai said the three suspects were members of a romance scam network operated by Nigerians. Police had kept a close watch on the group after it was reported they had swindled money from victims in Udon Thani province.

According to Bangkok Post, an extended police investigation found the gang had been running the scam for more than a year and had at least 10 million baht(about $322,000) in circulation in their accounts. Many people were believed to have fallen victim to the gang.

“We are now hunting down the two Nigerian men, who are the leaders of the network. We have learned of their whereabouts in Thailand,’’ Pol Lt Gen Surachai said.

A transgender woman had earlier filed a complaint with Muang Udon Thani police that she had been duped by a foreign scammer via Instagram into transferring money to him. The scammer used the Instagram name Cheong Xao and claimed to be a Malaysian national working in the US.

After they had chatted over the internet for over four weeks, Cheong Xao said he would send brand-name goods to her via a courier firm, but she had to first transfer money to cover the tax charges, about 117,000 baht, to a bank account he nominated.

“Police tracked the bank account number the victim sent the money to and found out it belonged to Mr Thanate”, one of the Thai suspects, he said.

“The suspect then implicated Ms Wathinee as a person who withdrew the money, which was later deposited into two bank accounts held by Ms Kotchakorn and Mr Ugochukwu Geoffrey Ofoma.”

Romance scams appear to be the past time of some Nigerians in Thailand. In the last month, three Nigerians have been arrested in the country for a similar offence.