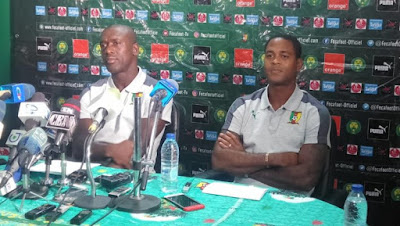 Former Netherlands midfielder Clarence Seedorf has been sacked as Cameroon coach after the side failed to defend their Africa Cup of Nations title.

The former Real Madrid player, 43, had been in charge for under a year.

His assistant Patrick Kluivert, his former Netherlands and Ajax team-mate, has also left his role.

Cameroon lost 3-2 to Nigeria in the last 16 in Egypt, leading to the country’s sports minister calling for Seedorf to leave.

Seedorf had said he was happy to continue and felt his squad had shown promising signs.


The former Real Madrid and AC Milan player signed a four-year deal to take charge of the Indomitable Lions in August 2018.

But a statement confirmed that “following the premature exit of Cameroon’s men’s flagship squad, Cameroon’s football federation in line with clauses in their respective contracts has decided to bring an end to the contracts of Seedorf and Kluivert”.

Seedorf and Kluivert were given the task of retaining the Africa Cup of Nations – which was originally supposed to be held on home soil in Cameroon – and also set the target of reaching the 2021 edition of the tournament and the 2022 World Cup in Qatar.

The long-term contracts had also stipulated the Dutch duo must live in the country and provide support to the other national teams.