Adeleke has gone through a lot, says PDP rep after supreme court verdict 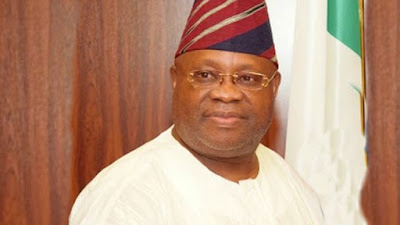 Oluwole Oke, a member of the house of representatives, says Ademola Adeleke, candidate of the Peoples Democratic Party (PDP) in the Osun governorship election, has gone through a lot.
Oke, who represents Oriade/Obokun federal constituency in Osun state, spoke after the supreme court delivered a judgement in favour of Gboyega Oyetola of the All Progressives Congress (APC).
He thanked Deji Adeleke, the elder brother of Ademola “for his moral, financial and spiritual support since his younger brother joined  politics.
After the death of Isiaka Adeleke, Ademola joined the senatorial race and was eventually elected.


Oluwole praised the PDP governorship candidate for his sacrifices.
He told members of the party to return to the drawing board to plan ahead of the next gubernatorial election in the state.
“The lessons here is for us to go back to the drawing board think through our laws, constitution and the electoral act to avoid a situation where both the electoral body or the courts will usurp the duty or functions of lawmakers,” he said.
“My thanks and appreciation to our party leaders particularly our chairman for his doggedness and hard work and our teeming party members and supporters for their belief in us.”
Oke commended the efforts of Ademola Adeleke, the party’s candidate and congratulated Oyetola on his victory at the court.
“He (Oyetola) should see every citizen of Osun as his and I urge every citizen to support him to succeed, while remaining vigilant as well,” he said.
“I therefore wish to urge our members to remain vigilant and watchful and ensure delivery of Democratic dividends to our people.”
The supreme court had upheld the election of Oyetola in the September governorship election.
Adeleke has also accepted the ruling of the court.