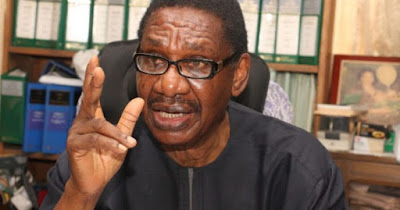 The leadership of the Peoples Democratic Party (PDP), on Sunday upbraided the Chairman of the Presidential Advisory Committee Against Corruption (PACAC), Prof Itse Sagay over his comments on the recent Supreme Court judgements on state elections in Zamfara and River States.

Prof Sagay had, in a recent press interview, described the apex court’s judgments as “national tragedy” and “unimaginable injustice”.

The PACAC chair had gone ahead to say that the judgments should not be allowed to stand, comments which the PDP considered a call for “anarchy and rebelliousness against our constitutional democratic order and rule of law”.

In a statement by its national spokesman, Kola Ologbondiyan, the PDP flayed Sagay’s frontal attack on the justices of the apex court and the judiciary as a critical institution of government.


It described the Professor’s comments as “resort to incitement and hate language against the Supreme Court Justices”, adding that they have exposed the mindset of the Buhari administration.

According the the main opposition party, the Presidency and the governing All Progressives congress (APC) are desperately plotting to “cow, blackmail, intimidate and attempt to annex the judiciary, particularly, the Supreme Court”, ahead of the determination of PDP’s presidential election petition pending before the Court of Appeal.

“The PDP notes that Prof. Sagay’s comment has also revealed the level of condescension, derision and contempt the Buhari Presidency and the APC have for the Justices of the Supreme Court.

“By declaring the upholding of justice by the Supreme Court as a ‘national tragedy’ and ‘unimaginable injustice’, and suggesting that, ‘we (probably, his party members) should not allow’ the judgment as delivered, Prof. Sagay is calling for anarchy and rebelliousness against our constitutional democratic order and rule of law.

“Our party believes that such intentional attack on the integrity of the Supreme Court can only emanate from feverish apprehensions by the Buhari Presidency and the APC that they might not have their way in the Presidential election petition, hence this resort to blackmail”, the party added.

Stating that the PDP is law-abiding party, the party said it would continue to hold the integrity of the justices as well as the institution of the judiciary very high.

It vowed never to support this attempt by “agents of the APC” to clip and sequester the judiciary for their partisan interests.

The party insisted that there is no way Prof. Sagay, a professor of Law, can justify his call for the rejection of the Supreme Court judgments on Zamfara and Rivers states.

The judgments, PDP said, were in  protection of rule of law, democratic ethos, as well as the wishes and aspirations of the people.

It accused the APC of attempts to take control of the various  states through manipulations and awarding of fictitious votes to their candidates.

The PDP called on the Supreme Court Justices to note the machinations of the APC and continue to be firm in upholding justice.

According to the opposition party, which benefited handsomely from the two cases, the judgements should serve as lessons to political parties on the need to adhere strictly to rules of internal democracy in the electoral process.