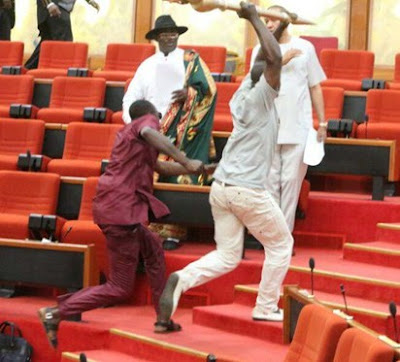 Fifteen months after two suspected thugs allegedly led by Senator Ovie Omo-Agege invaded the Senate chamber and snatched the mace, the police are yet to conclude their investigation into the incident.

It was gathered that the police had been treating the incident as a cold case, believing new information could lead to the indictment of the Deputy Senate President.

The force took Omo-Agege into custody shortly after the incident on April 18, 2018.

He was subsequently released while an investigation was launched into the theft which generated a national uproar.


The lawmaker representing Delta Central was consequently suspended by the Senate for 90 days, but he successfully challenged the resolution in court which ruled that the upper chamber had no powers to suspend him.

The mace was recovered under a flyover near Abuja city gate some hours later where it was abandoned.

Six suspects arrested in connection with the incident were released by the police.

Our correspondent learnt on Saturday that although the case file had been shelved, the investigation “has by no means died.”

A police source said, “The case was dropped because we are yet to apprehend all the thugs who stole the National Assembly’s symbol of authority. Although Omo-Agege was detained briefly in connection with the theft and released on personal recognition, the investigation has not ended or closed.

“It could be revived anytime we have fresh facts or information. So,  it is wrong to say the Senator is out of the woods on account of his emergence as Deputy Senate President. We could invite him for interrogation when the need arises; he doesn’t have immunity from criminal prosecution.”

Another source said the testimony of the former Divisional Police Officer in the National Assembly, CSP Abdul Sulu-Gambari, indicting Omo-Agege and others, was part of the evidence linking the suspects to the incident.

Sulu-Gambari in his testimony on May 9 before the joint Senate and House of Representatives ad hoc committee set up to investigate the invasion of the Senate, blamed the incident on the conspiracy among some security agencies and lawmakers.

He also tendered the photographs, identities and other exhibits recovered from some of the suspects arrested in connection with the incident.

But Sulu-Gambari was redeployed to Adamawa State while the office of the DPO at National Assembly was placed under the Inspector-General of Police by then IG, Ibrahim Idris.

Force Public Relations Officer, DCP Frank Mba, did not respond to repeated phone calls for an update on the investigation into the mace theft on Saturday. He had yet to reply a text message sent to him on the matter as of the time of filing this report.