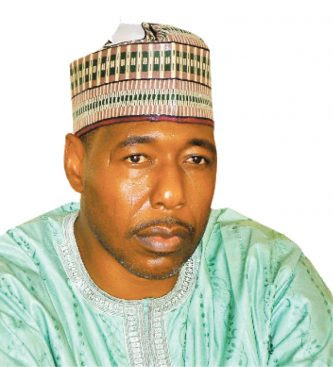 Governor Babagana Zulum of Borno State has said that an all-encompassing strategy is being developed to reduce Boko Haram attacks in the state.

The governor stated this in an interview with newsmen in Damboa after he visited the town and surrounding communities to assess security in the general area.

Zulum, who also visited the 25 Task Brigade at Damboa alongside Chief of Army Staff, Lt.-Gen. Tukur Buratai said he had met with President Muhammadu Buhari on the strategy.

According to him, the chief of army staff also attended those meetings.


He, however, said the strategy would not be disclosed for security reason but added that “We shall include the traditional rulers.

“We are now looking forward to ensuring that strategies are developed through communities, community-driven approach.

“We have intimated the traditional rulers to strategise and ensure that a lot of information dissemination is being carried out."

Zulum also said the state would collaborate with the military to work out modality to ensure that terrorists, willing to surrender through the “Operation Safe Corridor’’ were re-integrated.

“The most important thing is that military and government have to work out some modalities to ensure that those, who are willing to return (surrender), we shall look at the possibility of re-integrating them through the “Operation Safe Corridor."

On the dilapidated Damboa-Maiduguri highway, Zulum said that state government had acquired two bulldozers and six excavators as part of efforts to rehabilitate and make it safe for traffic.

It was gathered that the state government had embarked on clearing bushes on both sides of the highway, while Civilian JTF and hunters supported by troops provide protection for those doing the job.

“The people and government of Borno state are indeed very grateful to the Nigerian army.