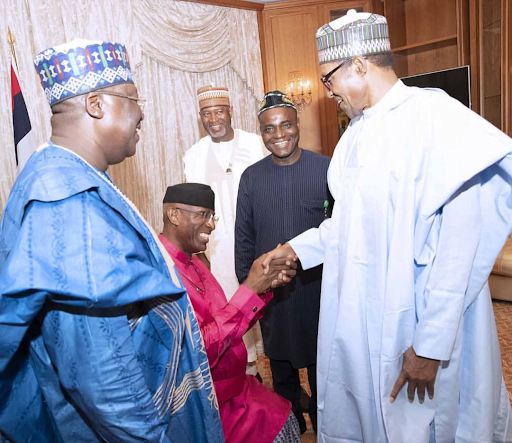 Omo-Agege was at the Presidential Villa with Senate President, Ahmed Lawan, to pay homage after their emergence as principal officers of the Red Chamber.

Also on the entourage were Presidential Adviser on National Assembly, Ita Enang, Senator Ibikunle Amosun, Senator Jubrin Barau among others.

After Lawan shook hands with the President, Omo-Agege did same and then knelt as he exchanged pleasantries with Buhari.
Earlier, Omo-Agege described the inauguration of the 9th Senate as a new chapter.


“We all know what transpired in the past but what happened today has turned the page on 8th Senate and we have moved on to the 9th Senate”, he told newsmen.

“I look forward to working with my colleagues irrespective of political platforms. We will work together as brothers and sisters to move the senate forward.

“I attribute my victory to God and God only, there is no explanation for it,” he added.