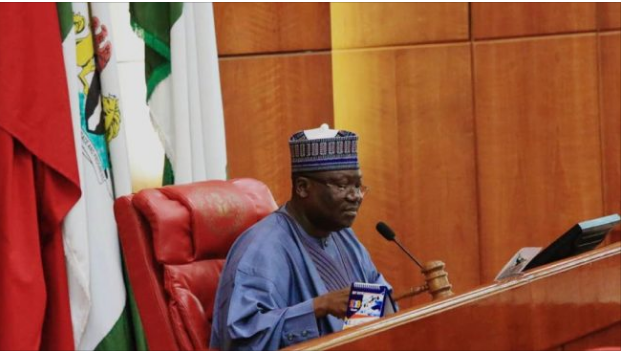 A controversy is brewing over the appointment by the Senate President, Ahmed Lawan, on Tuesday, of Festus Adedayo as his Special Adviser on Media and Publicity.

Mr Lawan had also appointed Mohammed Aji as his Chief of Staff.

Betty Okoroh, the Special Adviser to the Senate President on Administration, said the appointments were made based on merit, experience, track record, and competency.

Although Mr Adedayo had served as media adviser to a former governor of Oyo State, Abiola Ajimobi, and Chimaroke Nnamani, former governor of Enugu State, his new appointment has triggered outrage mainly from loyalists of the ruling All Progressives Congress (APC).

This, many said, is because Mr Adedayo has over the years been a strong critic of the APC and the President Muhammadu Buhari-led administration.

Adedayo’s previous columns
Besides serving as media aides to past governors, Mr Adedayo has also been a regular columnist for major newspapers.

In his write-ups, he never failed to hide is disdain for the ruling party and its administration.

In one of his articles titled “Who will be Nigeria’s last president?”, Mr Adedayo criticised the federal government’s decision to establish a radio station “principally devoted to Fulani herdsmen”.

“I have this hunch that by the time President Muhammadu Buhari leaves office after his second term, there may either be no Nigeria as properly so called or the nagging questions of our existence would have led to the ultimate violent resolution of our identity and leadership crises,” he said.

In another piece, the Ibadan-based journalist condemned the trial of former Chief Justice of Nigeria Walter Onnoghen, describing it as President Muhammadu Buhari’s desperation for re-election into office.

“Buhari’s recourse to spitting on the constitution he swore to uphold, his desperation for a second term, as well as that of the hawks surrounding him – in whose veins blood does not flow – will certainly drag Nigeria towards Cote d’Ivoire and land Buhari on the laps of Gbagbo.

“If Chief Justice Onnoghen is guilty of all those fabulous allegations levelled against him, he certainly deserves to rot in the hottest part of hell. But, Buhari does not have the constitutional power to sack him,” he wrote.

In a statement signed by its Chairman, Niyi Akinsiju, and Secretary, Cassidy Madueke, the group urged him to demonstrate loyalty and integrity on the job.

“In fact, we’re surprised that Adedayo would consider, let alone accept, an appointment under the APC after all he had done to denigrate and diminish the party before, during and after the February elections.

“This was a man who railed unceasingly at the APC and its Presidential candidate. This is the prophet of doom who predicted the imminent disintegration of Nigeria and that Buhari might be the last President of Nigeria,” part of the statement read.

The BMO recalled that the new SA Media to the Senate President had served two People Democratic Party (PDP) governors in the South-west and South-east and wondered when he became a “born-again progressive”.

“We hereby advise the new media aide to demonstrate his loyalty and commitment to the ruling party by immediately going to his Ward to register with the APC and become a card-carrying member of the party.

“We urge him to use his office to ensure that the bond between his new boss and President Buhari remains unbroken. We know for a fact that the Senate President has avowed his love and loyalty to President Buhari and has pledged a harmonious working relationship between the National Assembly and the President.

“Nothing must happen to strain or put that relationship in jeopardy”, the group added.

I didn’t ask for the job – Adedayo
Speaking on Wednesday evening, Mr Adedayo said he did not ask for the appointment.

The journalist, who described himself as a professional “who writes what I feel about the need for a good society,” said most of those who were commenting mistook him for a politician.

“I have never been a politician. But if the politicians feel that it is their birthright, they can have the appointment; it is not a do or die thing for me at all. If I go there, I’m going there to serve the country,” he said.

When asked if he has accepted the appointment, he said he is still consulting with his family.

“As I talk to you, I’m a student of the Law School and it is a certificate that I’ve sought to own all my life. So, for me to abandon it, is an issue that I’m still battling.

“I have never done anything in my life other than in the media. I have been a reporter, features editor, opinion editor. The only ‘affiliary’ thing I’ve done is be a media adviser to two governors and in those respect, I did my job as a journalist and a professional.”

Mr Adedayo said although he had worked with PDP and APC governors, he had never been a card-carrying member of any political party in Nigeria.

“The Senate President, I reckon, wanted me on the basis of my professionalism but if politicians feel it is theirs for keep, so be it,” he said.

He added that should he accept the appointment, it “can never change anything.”

“One which I always did with my principals in government was to walk up to them and tell them the truth. If I take this appointment, I will continue in the same mode.”

Different reactions
Members of the APC, as well as Nigerians on social media, have condemned Mr Adedayo’s appointment as the Senate President’s spokesperson.

Already, there is a hashtag #sackFestusAdedayo already trending on Twitter.

The senator representing Osun Central, Ajibola Bashiru, described his appointment as “unfortunate” while reacting to the announcement on the Senate president’s twitter handle.

Below are some reactions:

SP @DrAhmadLawan
Festus Adedayo appointment is a big joke
You can't ridicule us this way
This is another article from him just a year ago when he was abusing and cursing our PRESIDENT AND APC.https://t.co/gPL6wfyWrF#SackFestusAdedayo

All of you calling for the sacknof Festus Adedayo are either stupid, foolish or brainless. When lastvhave you idiots called for the sack of the service Chiefs or the sack of Buhari himself. Adedayo is going nowhere. #sackFestusAdedayo
— Duru Chibuzor eric (@DuruchibuzorE) June 19, 2019

You see our problem as a people, 100+ Nigerians dead this week and the biggest problem #sackFestusAdedayo? Sack the person that appointed Adebayo, sack Omo agege, Sack Ganduje, sack Gbajabiamila, sack everybody!

So Tribune Newspaper is deleting all Festus's article.

I just hope and pray that won't protect him.

We have printed copies already, we have archived it and even have screen shots.

You deleting them are enough evidence that your goat of a staff is evil.#sackFestusAdedayo
— Hon. Oguntoyinbo O. Ismael (@lanreneville) June 19, 2019

"To me, as desirable as it is, this sudden spin of June 12 as democracy day by Buhari is akin to Ejigbadero’s attempt to deploy weapons of deception & subterfuge, using June 12 as an alibi"

I am a die hard fan of our great party @APCNigeria, how can i suffer with my party and when its time to enjoy the party success, one saboteur that has been bashing our great party now appointed to enjoy our sweat, NO, this can't stand. @DrAhmadLawan#sackFestusAdedayo
— BMat (@lentin2) June 19, 2019

APC and PMB endorsed @SPNigeria Ahmed Lawan, the Senate president is expected to work with PMB and the party to achieve a common goal. How can a known critic of Buhari and the party, a man who called Buhari ' mentally unfit', 'despot', 'fido dido' & constantly rubbished the party
— Dr. Guendouzi (Yaro mai Lokachi ) (@fimiletoks) June 19, 2019

Evidence abounds on the internet and offline of how this fellow Festus Adebayo insults the president, leader of APC Bola Tinubu and the party. @SPNigeria you must #SackFestusAdedayo now.
— BringBackOurGirls (@amenahuruemu) June 19, 2019