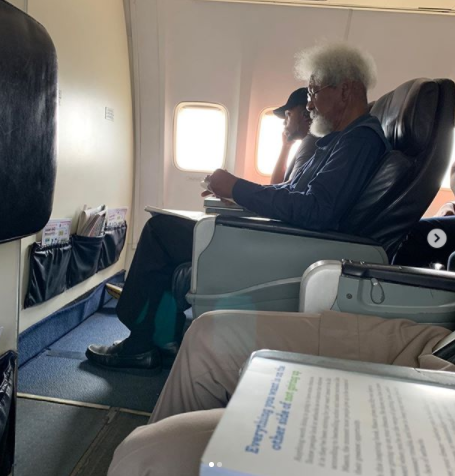 Oil Mogul Tonye Patrick Cole has narrated a story that will shock the tribe of usually cultured Nigerians: how a young man ordered Professor Wole Soyinka, Nigeria’s only Nobel laureate, literary giant, gadfly, octogenarian, globally and nationally respected figure out of his seat, on a flight.

Tonye Cole did not indicate whether it was a local or international flight, but the story posted on Sunday has elicited outrage and condemnation of the young man, for committing sacrilege. Some others have sided the young man for insisting on his right.

I met one of the greatest Nigerians walking the earth today and as with other times, he was genteel, witty, forthright and humble. My smile gives me away as he permitted the picture whereas he would have preferred to get back to his newspapers.

Then we boarded the flight and after assisting him with his bags, he took the window seat and promptly started reading again.
A few minutes later this young man, baseball cap, t-shirt to show his muscled chest and tattooed biceps boards the plane and tells Prof he is on his seat (which he was). Those of us including the cabin crew tried to reason with Bobo Fine to let the old man be but the chap refused. He insisted Prof should vacate his window seat, which the old man quietly did for his original aisle seat next to him.
I couldn’t understand how we got to this point where we no longer have respect for elders, even if are so ignorant of the great global personalities in our midst. Is it too much to ask that an elderly man be allowed to remain in a seat allotted to you in the same business class cabin and the same row?
Na wa o! 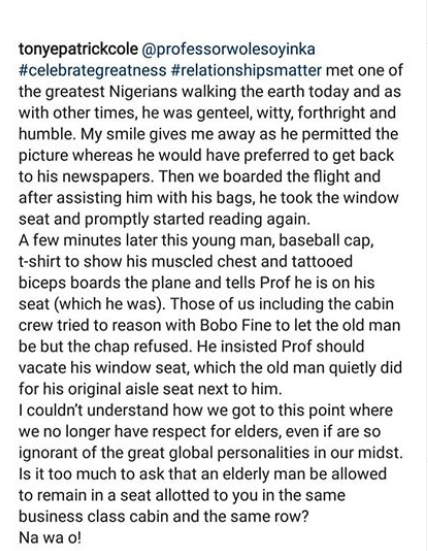 Comedian and MC, Gbenga Adeyinka, One of those who reacted to the post said: It’s a sad reflection of who we have become. Let’s even forget who Prof Wole Soyinka is (although thats hard to do). Consider his age. If that is where he feels comfortable, it behoves the young man to allow him sit there considering his age. It’s like me telling my father to stand up from where I sit normally when he comes to visit. We were brought up to stand up for the elderly, women (pregnant or otherwise) but I guess that is no longer the NORM. ITS A PRIVILEGE… (A VERY RARE ONE AT THAT ) TO BE SEATED CLOSE TO PROF. My opinion is the YOUNG CHAP SHOULD BE ASHAMED OF HIMSELF. IT’S LIKE MEETING WILLIAM SHAKESPEARE AND TELLING HIM TO VACATE A SEAT COS YOU WERE ALLOCATED THE SEAT”

There are some Nigerians who felt the young man committed no wrong:

Uzosfoodlab wrote: Culture versus what is right. The manner of the asking was probably off. However, you should sit where you are assigned. Prof should have sat on his assigned seat and when the young man or whoever was in the seat he preferred came, said – would you mind swapping seats as I prefer the window seat? That’s the right thing to do. I am a huge fan of the Prof and I believe in respecting our elders. However, I wonder, do elders use their status to subliminally bully people too? Same question for known faces that’s take advantage of their celebrity and infamy to make people uncomfortable.. 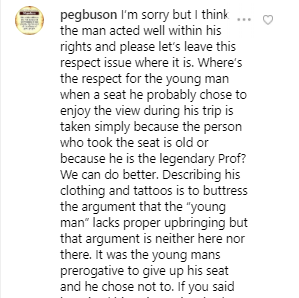