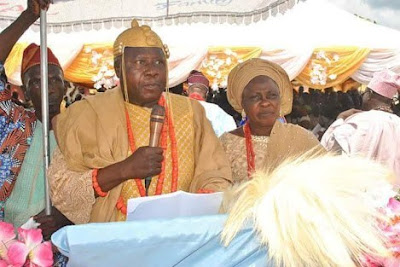 The Olomu of Omuaran in Irepodun Local Government Area of Kwara State, His Royal Majesty, Oba Abdulraheem Adeoti, examines the current spate of insecurity in Nigeria from a historical perspective, blaming the problem on get rich syndrome, population explosion and failure of governance. He believes the creation of an enabling environment for growth would tackle insecurity better than the recruitment of more people into the police.

What do you think is responsible for the widespread insecurity in Nigeria?

Our population is growing geometrically. Instead of the government to adequately plan, it folded its arms. We continued like that resulting in what we have at the moment. The worst of it all is unemployment that commenced in the early 1980s. Up until now, there is no adequate facts to know the number of students graduating from our institutions, and establishments to accommodate them. Since the government is asking people not to rely on white-collar jobs, what is the government putting in place to discourage people from seeking white collar jobs? Since the 80s we have produced graduates from polytechnics and universities, who end up not getting jobs. We also had local governments that provided the basic functions of government at the grassroots but we no longer have such a system.  We have the problem of non-payment of salaries in addition to the growing unemployment rate. All these combined to produce insurgency, armed robbery, and kidnapping.

Some have called for the recruitment of more people into the police as a way of addressing the security challenges. What do you think?


It is unfortunate that we are employing fire brigade approach to issues in Nigeria. The government is considering how to increase the number of policemen to combat the activities of bandits, armed robbers, insurgents and kidnapper but it can’t work. Government at all levels should create employment opportunities to engage the restive youths. A hungry man is an angry man. We need a more proactive solution to insecurity. From my experience on the throne,   people between the ages of 13 and 40 have taken to Indian hemp smoking, drinking of local gin, and consumption of tramadol because they have no work to do. Most of them are graduates, who had looked forward to securing jobs after graduation. In other climes, governments pay the unemployed to prevent them from embracing crime. The government should make deliberate and workable policies on entrepreneurship and industrialisation which the youths should key into.   It is not only the government that is guilty of the spate of insecurity in the country, the governed are also to blame. Everybody wants cheap money in Nigeria. The youths are no longer interested in working and this is responsible for the mass drift into politics, while those, who are not in politics, embrace criminality.