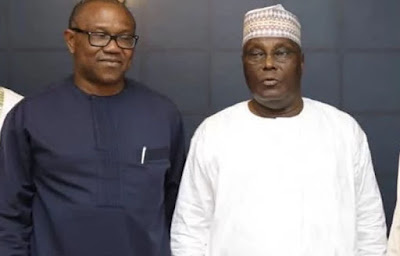 Peoples Democratic Party (PDP) candidate in the February 23 presidential election, Atiku Abubakar and his running mate Peter Obi, have asked the President of the Court of Appeal, Justice Zainab Bulkachuwa, to name her replacement in the five-man panel constituted to hear their petition.

In a letter by the Atiku-Obi presidential election petition legal team, the candidates reminded Justice Bulkachuwa that she promised to name her replacement while withdrawing from the Presidential Election Petitions Tribunal (PEPT) panel on May 22.

Atiku and Obi, in the letter dated May 31, and signed by Silas Joseph Onu, drew Justice Bulkachuwa’s attention to the fact that time was of the essence.

The former vice president and the PDP are, by a joint petition, challenging the outcome of the last presidential election won by President Muhammadu Buhari of the All Progressives Congress (APC).

Although the PEPT dismissed their motion seeking Justice Bulkachuwa’s withdrawal from the panel on grounds of likely bias, the Court of Appeal President, recused herself as the tribunal’s chairman on personal grounds.

Since the development on May 22, the tribunal has not sat, prompting the letter by the Atiku/Obi legal team.

The letter, a copy of which The Nation sighted in Abuja yesterday, reads: “I am one of the counsel in the legal team prosecuting the above petition on behalf of the petitioners.

“l have the authority of the lead counsel, Dr. Livy Uzoukwu (SAN) to write this letter.

“My Lord will recall that on 22nd May 2019, the above mentioned petition came up for a motion requesting that my Lord to recuse himself from further presiding or participating in this petition.

“At the end of the proceedings, my Lord graciously recused himself on personal grounds and promised to appoint another Justice to continue with the petition.

“My Lord, it is 9 (nine) days since the date my Lord recused himself and nothing has been heard regarding the replacement that was to be made thereafter.

“Considering the strict requirement of keeping to the constitutional calendar for a petition and the obvious fact that time is also running fast against the petitioners, we pray my Lord to act timeously in appointing a replacement so that we will get a hearing notice and continue with the petition in the interest of justice.”