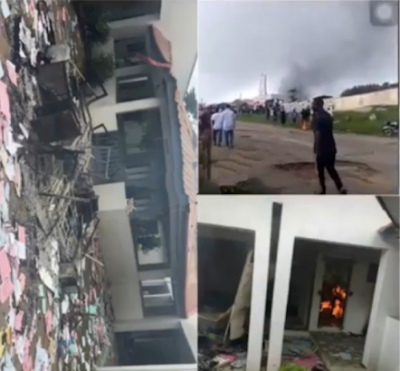 Osun State Poly, Iree students have burnt down the medical center in the school after one of the their colleagues died over the health center’s alleged negligence on Friday evening.

According to reports, the protesting students stormed the school’s health centre on Saturday morning set fire on the school ambulance and other equipment in the clinic.

They alleged that medical personnel had left the clinic as at the time a Higher National Diploma I student, Aminu Sheu Hammed was brought in after slumping in the examination hall.

Sheu had slumped immediately after writing his second semester examination and died hours later at a hospital outside the school campus.

Sheu, a student of the Department of Applied Chemistry was said to have been observing the ongoing Ramadan fast before he suddenly lost balance after submitting his paper to invigilators at the PLT examination hall.

According to the polytechnic’s Public Relations Officer, Mr. Tope Abiola, Sheu was said to have been rushed to the school’s clinic at about 4:30pm where medical personnel on duty made frantic efforts to resuscitate him but to no avail.

Abiola said that Sheu was immediately referred to another hospital in the polytechnic town in order to get more hands from other medical personnel.

Unfortunately, Sheu gave up the ghost few minutes later at Ogo Oluwa hospital where he was taken to in the school ambulance.

Abiola said that the deceased was observing the Ramadan fasting and that he might have slumped due to loss of strength.