Nobody can stop my reappointment as minister – Solomon Dalung boasts

9:44 AM CuteNaija 0 Latest News in Nigeria 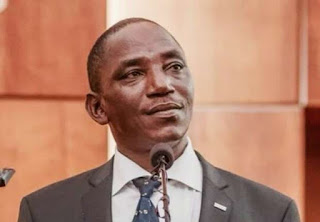 Immediate past Minister of Sports, Mr Solomon Dalung, says his reappointment by President Muhammadu Buhari is unstoppable by “any human being.”

He stated this during an interview with Punch Newspaper on crisis in the basketball, athletics and football federations, as well as the Nigeria Football Supporters Club, during his tenure as minister.

When asked to clarify allegations that he had issues with some stakeholders he perceived were working against his reappointment, Dalung replied, “No, there is nobody born of a woman that can stop my appointment if God wants it to be. I am not carried away by such sentiments.”

The Plateau-born lawyer, who insisted that he managed the crisis “effectively” as minister, noted that he was prepared to bring advancement to the sports sector, if reappointed.

“It’s God that gives power. If He chooses again to give me power, I think I will focus more on consolidating on a very viable grassroots development architecture; I will redirect most of government’s funds to that. The professional athletes will always be compensated for representing the country, but we need to balance things.

“I hope to also de-emphasise the construction of some of the giant sporting infrastructures that we have, as well as align myself with the world by adapting to convertible methods. You can build up a sporting arena, play and still use the venue for another thing. I saw that when we went for the Commonwealth Games (Australia 2018).

“I will try to develop a workable and encompassing relationship between major sports stakeholders and the federations, including the media. I will also work closely with governors as concurrent legislative partners. I have travelled throughout this country and found that some states don’t have any stadium.

“Federations will be made to organise programmes in states and embark on specialisation sports, where every state will develop interest in its own sports.”