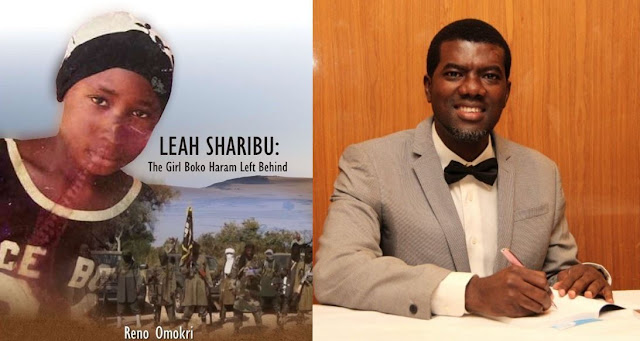 A former aide to former president Goodluck Jonathan, Reno Omokri is currently being accused of using the #FreeLeahSharibu campaign to defraud people.

Omokri has been a forerunner in the campaign for government to do everything in its power to ensure that Sharibu – The Dapchi school girl left behind in captivity after she was abducted alongside her school mate in 2018, for refusing to denounce her Christian faith is released.

Omokri had written a book on Sharibu and stated that the proceeds from the sale of book will go straight to Sharibu’s family — And has taken the campaign to free Leah to many countries in recent times including mount Everest.

However, accusations are flying everywhere on social media that Omokri, “hides under activism and religiosity to swindle and demean others with different opinions.”

Read some accusations below...


This picture says it all. Reno Omokri selling his book.

What proceeds goes to Leah Sharibu? NOTHING

What proceeds goes to her family? NOTHING

What proceeds goes to Dapchi community? NOTHING


Reno Omokri only does things that brings him personal gains. Has he ever placed a call to Leah Sharibu's parents? Has he ever sent them financial assistant? No? He wrote a book in her name hoping to sell and make money for himself. He's not who you think he is. #RenoUndarted
— TracyChels (@ChelsTracy) June 21, 2019


Do you also know that nuisance Reno Omokri is a fraud ?
He has been making huge sum of money in Leah Sharibu's name.
Selling shirts and getting grants and financial assistance from unsuspecting people.
Follow #RenoUndarted to see more.
— Kemisola Adekunle (@KemisolaAdekun1) June 21, 2019

Do you know Reno Omokri using leah sharibu's saga to pump money into his own pocket via selling of T-shirt?
Now you know#RenoUndarted pic.twitter.com/PJVyuKKfDw
— Fakolujo daniel Gbenga (@fakdaniel1) June 21, 2019